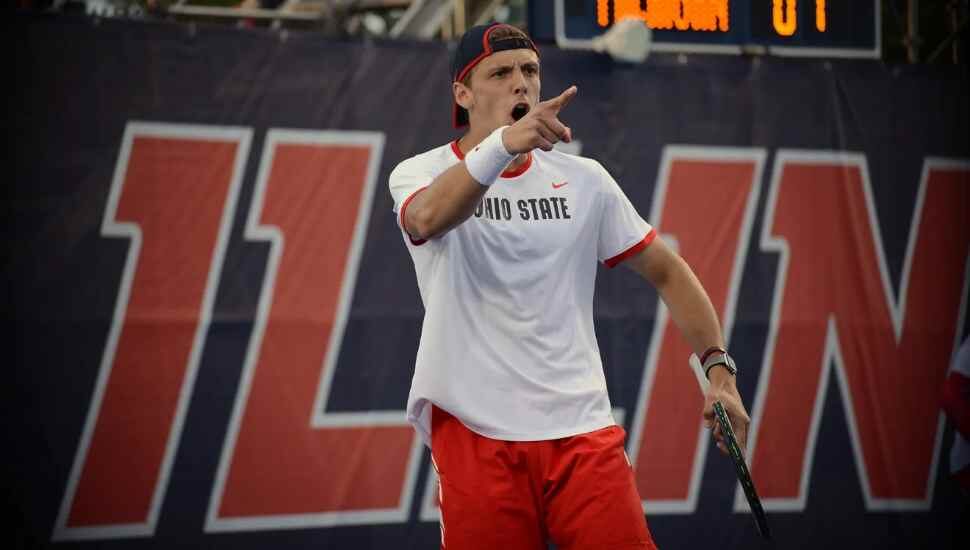 Richboro’s Andrew Lutschaunig helped his Ohio State Buckeyes tennis team advance over an arch-rival. Sweeter still, the quarterfinal victory came with his collegiate-tennis-star brother in the stands. But the celebration proved short lived. Bill Rabinowitz covered the bounce of emotions for The Columbus Dispatch.

After a rough start in doubles, Andrew won over his Michigan rival, keeping the Buckeyes alive.

Several distractions then interrupted singles play: A passing storm relocated the match indoors, where a faulty scoreboard made gauging progress difficult for Andrew.

But he knew that older brother Christian — a Penn State tennis player who inspired his sibling — was watching. And that was motivation enough to dig deep for the win.

“He’s definitely my role model,” Andrew said. “He’s probably the reason I picked up a tennis racket to begin with. Because I just wanted to do whatever he did.”

Christian admired what he saw: “He was cool and collected,” he said, referring to his brother’s play. “He always had to look in his eye that he was going to win.”

The two celebrated the victory.

The best epilogue would have been the title; unfortunately, juggernaut Kentucky eventually sealed the 2022 NCAA title.

The Lutschaunigs can console themselves with thoughts of best efforts and overcoming huge odds.

And family connections. Which may be the biggest win of all.

More on this quarterfinal win for Andrew Lutschaunig is at The Columbus Dispatch.