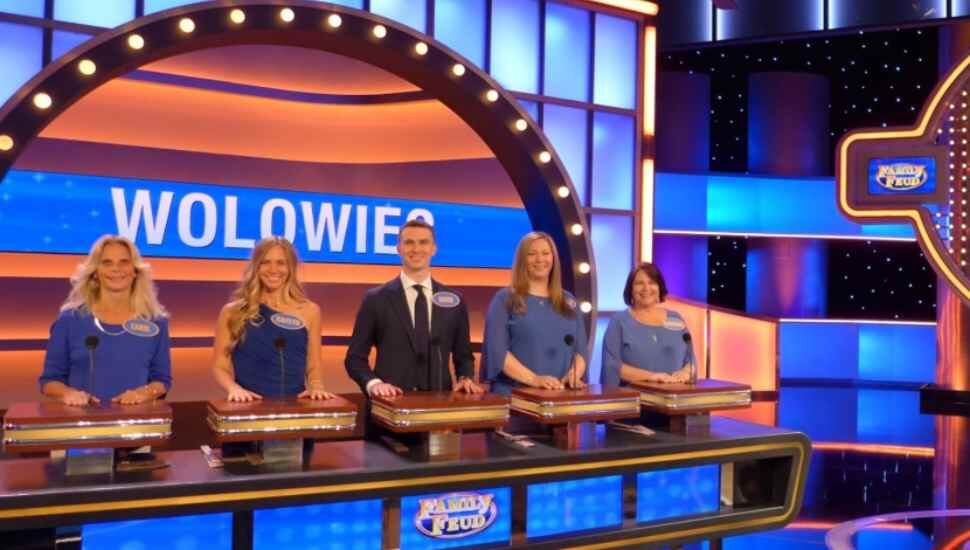 Image via Go PSU Sports.
Competing as "The Wolowiec Family" (a maternal maiden name), PSU alum Kevin Kerr was part of the Bensalem clan's efforts to walk away with Fast Money.

Penn State ice hockey player Kevin Kerr relied on mental (rather than physical) skills in a different kind of recent competition. Kerr and his Bensalem relatives earned the opportunity to ice other Family Feud contestants, as reported by Go PSU Sports.

Kerr and his family set their sights on this goal almost 18 months ago after seeing the game show’s casting-call notice on Facebook.

The rigorous audition process comprised a home-produced video, a phone interview, a mock version of the game played on Zoom, and an in-person demonstration of their survey-said skills.

To stand out in the initial screening, the team members wrote, rehearsed, and performed a family jingle. Getting past the Zoom version required “crazy enthusiasm,” Kerr said. So in response, they “just acted like lunatics.”

It worked. They were in.

Shooting the episode was somewhat nerve-wracking — given the show’s visibility and the dollars at stake. But Kerr said that host Steve Harvey was very good at putting everyone at ease.

The first attempts at the big money proved to be a shutout; the family was down 0-4 with one opportunity to play remaining.

They dug deep for the final effort and came away not only with cash but a new car.

More on this local Family Feud fam is at Go PSU Sports.