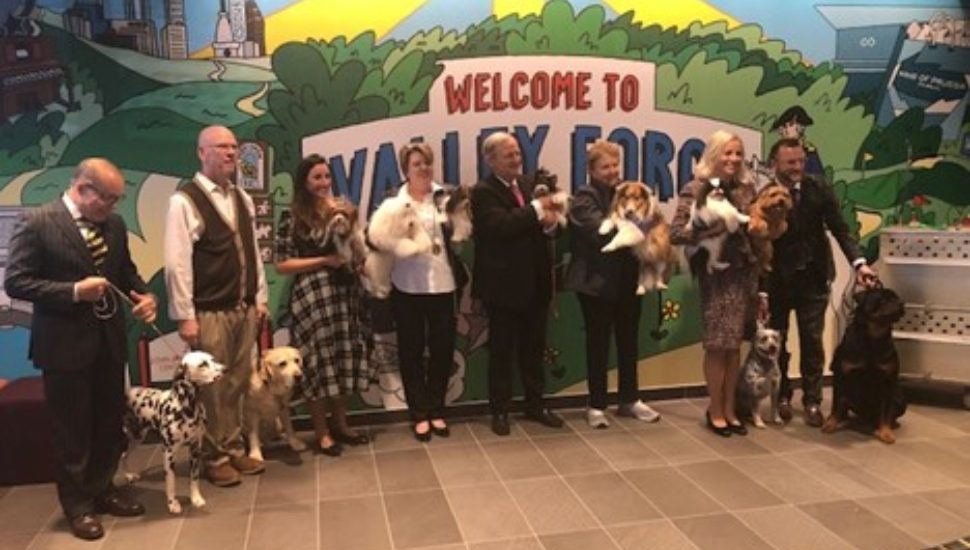 Image via Vizion Group PR.
Several dogs and their handlers appeared with host David Frei to highlight the coming National Dog Show this weekend in Oaks.

One of the highlights of National Dog Show week is its annual press preview, a harbinger of a one-of-a-kind local event.

At this year’s preview, a total of 11 dogs were on hand at the Tru by Hilton hotel in Audubon to the delight of TV cameras and reporters from multiple outlets throughout the Delaware Valley.

On hand to lend his vast knowledge as one of the dog world’s top experts was National Dog Show Presented by Purina expert analyst David Frei.

Frei introduced the competing canines and explained the intricacies of the unusual sport.

The owner-handler of CC and Rain, Adrianne Dering, made the trip from West Virginia to take part in the high-profile afternoon. Ani, a closer-to-home Biewer from New York City, just scooted down the Turnpike with her person, Whitney Aronson, to meet Frei and the corps of cameras.

Dering also brought her Coton de Tulear, Buff, a breed that was introduced at the National Dog Show in 2014.

Joining the event via Zoom from Boston was National Dog Show Presented by Purina host, John O’Hurley. He is known by legions of Seinfeld fans, And his fancy footwork earned him ultimate champion status on ABC’s inaugural Dancing With The Stars.

O’Hurley, who has written several books centered on dogs and family, discussed the show’s growing audience over its 20-year history.

He cited numerous reasons the event has swelled in popularity.

First, he said, is people’s innate love of animals. He then cited the primo spot the broadcast has on Thanksgiving Day: after the Macy’s parade but before a cavalcade of kickoffs.

He also mentioned the cuteness factor: “If 10 people are on an elevator together in silence and a dog gets on, those people are guaranteed to leave smiling,” he said.

Breed judging and group judging will be conducted through the day both Saturday and Sunday. For health and safety considerations, the weekend shows will be unbenched, and the dogs and handlers will not remain onsite after being judged.

Frei concluded by reminding the audience about obtaining tickets. He also stressed the importance of following the event’s health-safety policy, which requires proof of COVID-19 vaccinations, along with photo ID.

Further information on fully enjoying the 2021 National Dog Show in person is online.