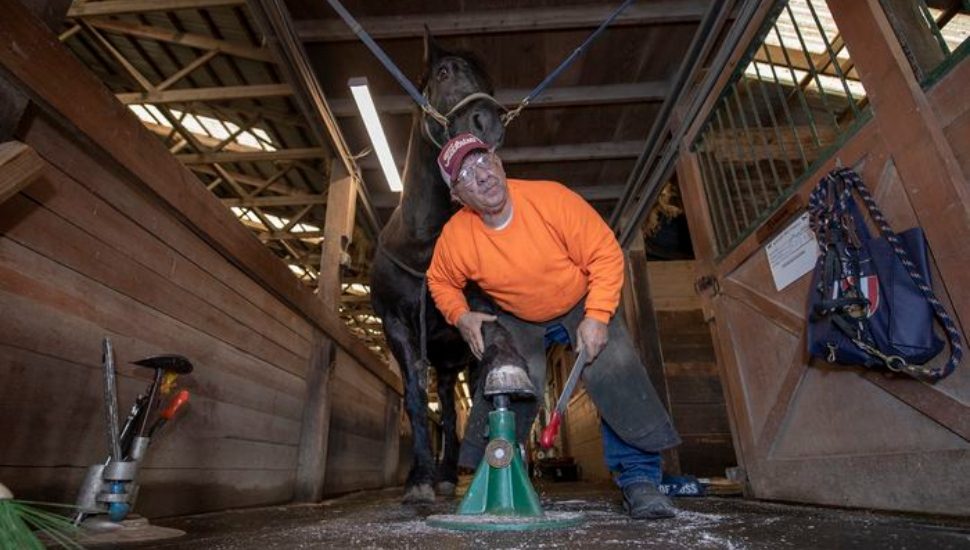 Some male senior citizens spend time doing things like playing cards or pitching horseshoes. Sonny Pistilli, 82, is pretty good with a horseshoe himself, but not for sport, for his livelihood. Pistilli, from Lower Saucon Township, is a rarity: a full-time farrier, a horse-shoer, writes Jason Nark for The Philadelphia Inquirer.

Pistilli grew up in N.J. and learned the technique from a nearby Irish craftsman, a veteran of the trade. Pistilli’s skills increased at about the same time the art of being a farrier started dying off; shoeing horses is physically demanding, and veterans don’t last forever.

Pistilli’s talent for equine footwear served him well; he once put shoes on Triple Crown winner Secretariat. But there’s not much glamor in the day-to-day particulars of his career: shaving a hoof, cleaning the muck, heating metal, pounding iron on an anvil and then nailing it expertly in place.

Repeat x 3 and onto the next horse.

His clients can weigh anywhere from several hundred pounds to a ton. Caution is a watchword. He has never been kicked while working on a horse but was once trampled into the hospital with a concussion.

Blacksmithing as a trade goes back to the 5th Century, concurrent with increased scientific knowledge about the magic between iron and extreme heat. Little has changed since then, other than the use of propane for fire/heat rather than wood, coal and bellows.

Pistilli’s age may hint at a move to retire, but he’s not interested. Retirement signifies the exit from a job, and Pistelli doesn’t view his current position as mere employment.

For more on Sonny Pistelli and his unusual way of making a living, see The Philadelphia Inquirer.

Newtown Mom Shares Pointers for Being a Pro at Pandemic Parenting