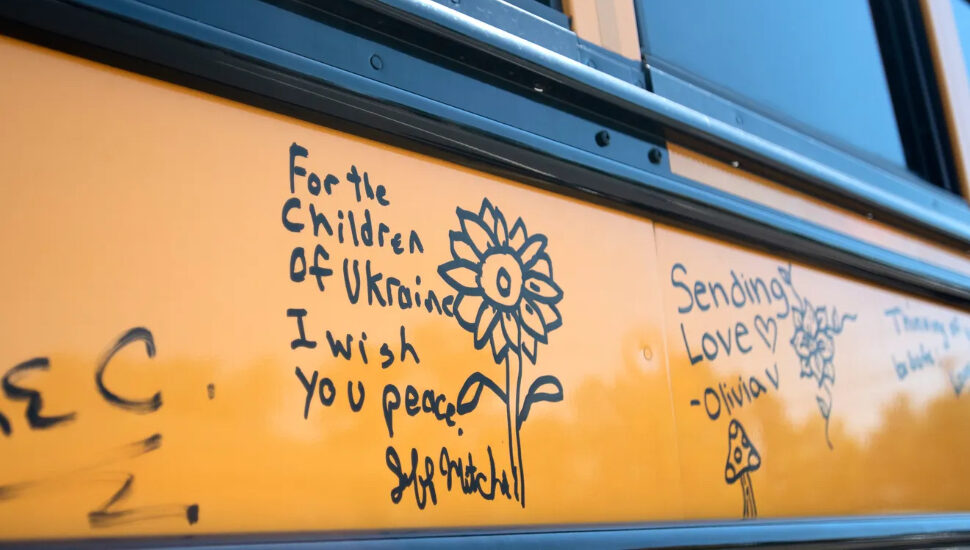 Image via Nur B. Adams, Bucks County Courier Times
The Trumbauersville bus com pay is donating a bus to students in Ukraine.

A bus manufacturer based in Trumbauersville is donated a vehicle to students in Ukraine who have had their educations uprooted by the recent conflict. Pryce Jamison wrote about the charitable act for the Bucks County Courier Times.

The Levy School Bus Company is donated School Bus 737 to students in the Solomonova district in Ukraine. The district was one of many areas of the country devastated by the recent invasion by Russia. The donation is a combined effort by the company with Rep. Joe Ciresi of Limerick, Pennsylvania.

“I told him how we just got back from Ukraine and that we’re doing this show to raise money for this Ukrainian school district, and he said, ‘Here, let’s make a phone call,” said Jamie Orr, a professional car builder who helped with the donation of the bus. “Standing on the side of the road, he called Warren Levy and Warren immediately said, ‘Yeah, let’s talk about this, we can do something.'”

Making its way through nearby towns like Quakertown, bus drivers around the county signed the bus with messages of hope for the students and bus drivers who will benefit from the donation.

Read more about the journey this bus is taking at the Bucks County Courier Times.

"Scarecrows in the Village" To Return To Peddler's Village. Find Out How You Can Participate in the Fun