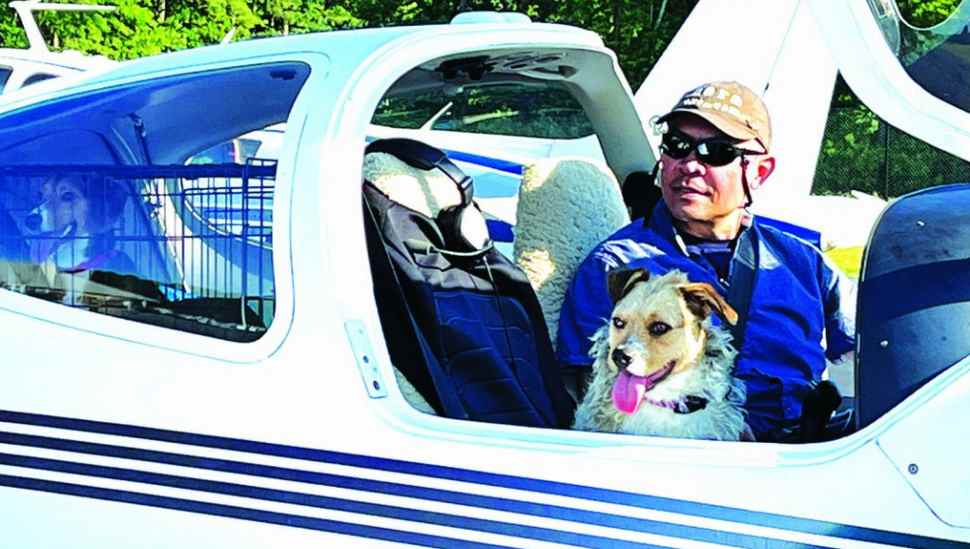 Image via Carol Vaughn at the Eastern Shore Post.
Ear-flaps up! Gia (in the crate in back) and Tasha (co-piloting safely up front) ready for takeoff to a new life in N.J., courtesy of Newtown pilot Andy Chen.

Newtown pilot Andy Chen delivered two stray dogs in need of help to a N.J. animal shelter, Ark of Promise. But the drop-off was no quick car ride. Carol Vaugn unleashed the story of this special transport in the Eastern Shore Post.

The canines in question were Gia, a young beagle, and Tasha, a corgi. They were found living outside a gas station in Melfa, Va., in the southern part of the Chesapeake Bay.

Chen flew the animals nearly 150 miles, connecting them with the Ark of Promise Rescue in Browns Mills, N.J.

It’s not the first time Chen has carried four-legged passengers aloft. He’s a steady volunteer with Pilots N Paws, a S.C. provider of free transport of rescue animals (the pilots themselves cover costs).

In November 2014, on his first day of licensure, Chen embarked on a transport — for a cat. Since then, his passenger manifesto has included one other cat, 22 dogs, and 12 puppies.

“We try and do it, A, because we want to try and help. B, for many of us private pilots, we simply don’t otherwise fly enough to maintain proficiency. So this is one way to help with that,” he said.

Gia and Tasha managed the hour-long trek quite well. Gia rode in a crate, but Tasha had a grand view of the landscape from her belted seat in the cockpit, aside Chen.

More on this cute canine cargo is at the Eastern Shore Post.

Be a Pal to Hal: Emaciated Dog Found Tied to Tree Is Now Adoptable at Main Line Animal Rescue