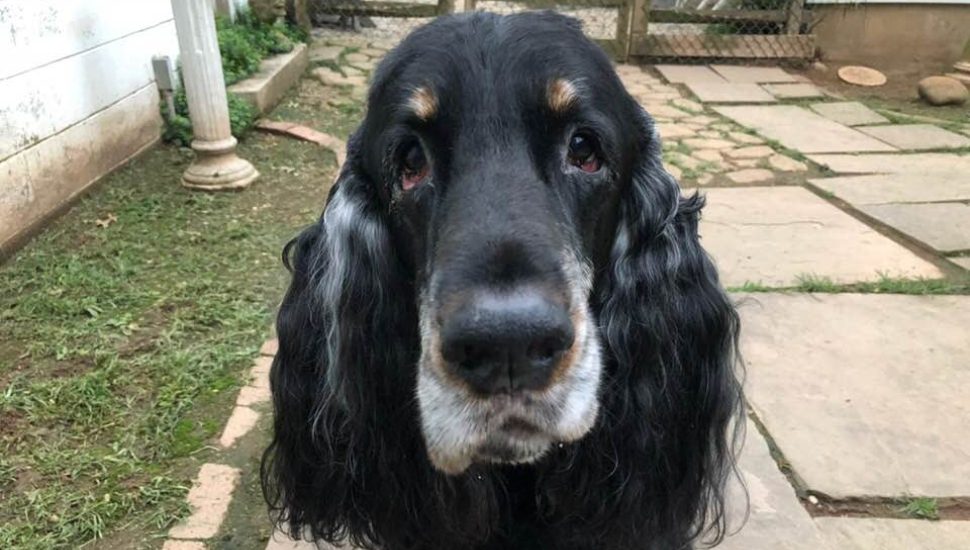 Kristeen Davidson-Christman, a Gordon Setter owner-handler, grew up in Telford-Souderton, where she still resides. Her father was a hunter, meaning that she shared her home with a cocker spaniel trained in flushing and retrieving small game.

Her proximity to her dad’s hunting dog gave Davidson-Chapman an intimate knowledge of the skill, athleticism, and intelligence of a working animal.

That knowledge eventually sparked her adult desire for a dog of her own.

She was attracted to Gordon Setters, a breed she said “…fit me and my personality and my lifestyle” in its blend of a focused work ethic and calm demeanor.

“The Gordon Setter is very smart without being too smart. Border Collies are a little too smart for me,” she laughed.

Deuce was welcomed into the Davidson-Christman home in 2000, and his breeder became her mentor into the world of formal dog competition.

“She helped me find my way,” she remembered.

That connection will bring Davidson-Christman and her Gordon Setter lineage to the Greater Philadelphia Expo Center later this month for the annual National Dog Show.

With the ongoing encouragement of her breeder, she then took him into the breed ring, a separate but equally as challenging AKC arena where dogs are evaluated on their adherence to a specific, formalized standard.

The National Dog Show is a benched event, one of the few left in the U.S.

Benched shows, according to AKC rules, designates that dogs and their people remain onsite while judging unfolds throughout the day.

The design is to allow the general public to wander the show, stopping by each dog’s assigned station (called a bench — hence the term “benched” show) at will.

The opportunity to meet dogs of every size, color, breed, and temperament in one location at one time is one of the reasons events like the National Dog Show are so popular.

It’s clearly fun for the public, but how is it on the dog?

Davidson-Christman explained that canine reactions to being inside with hundreds of people passing by can vary.

Her Gordon Setter Deacon (Deuce’s son), for example, “…loved it. Most of the time he would lay down and sleep. But he also enjoyed having people come up and pet his ears and poke his nose.”

“Eli (Deuce’s grandson), on the other hand, is all business. He wants to get in, work, and get out.”

Davidson-Christman says the key is to ensure competing dogs get plenty of exercise throughout the show. Dogs are able to leave their designated spots briefly throughout the show, for a stretch of the legs and to attend to other matters.

“Rye like rye whiskey,” Davidson-Christman explained. “Which is very appropriate for a Scottish breed.”

“For me, to see the offspring in the ring from dogs that I’ve owned and loved is very gratifying,” she described.

Among all the shows she’s attended, Davidson-Christman finds something special about the National Dog Show.

“It’s just a wonderful experience,” she said. “You can hear the dogs. You can feel the excitement.

“It’s well-run in a terrific setting. And the vendors are great. I always left with a new collar or a toy.

“But most of all, it’s the chance for a potential new dog owner to find out a lot of information on a lot of different breeds from the people who know them best,” she concluded.

Adult tickets are $16, priced in line with the Kennel Club of Philadelphia’s nonprofit mission of educating the public about the overall value of dogs. Owing to their inability to be vaccinated, children under 12 cannot attend the show this year.

Registration of vaccinated status should be done on CLEAR, a free app.