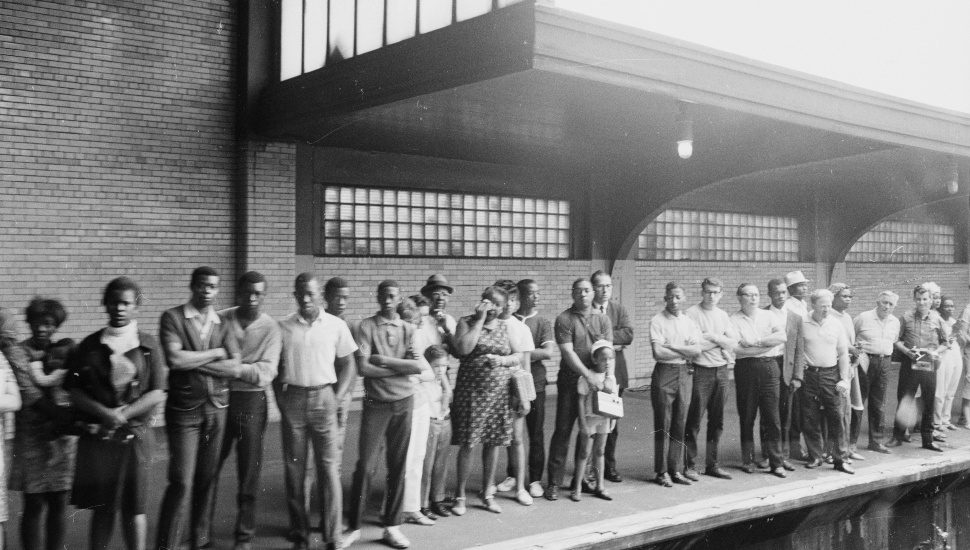 Image via jfk.blogs.archives.gov.
People on a train platform wait for Robert Kennedy's funeral train to pass by.

When the funeral train carrying the body of Robert F. Kennedy traveled from New York to Washington, D.C., on June 8, 1968, it passed through Darby Borough, writes Steven M. Gillon for History.com.

Gillon, from Darby, caught a glimpse of the train a few hundred yards from his house.

“I will never forget the scene, a snapshot of unity: old and young people, African-American and white, standing shoulder-to-shoulder,” Gillon writes.

“As the train passed below, I spied Edward Kennedy, the last surviving brother, astride a platform on the last car waving gently to the crowd. Behind him sat the flag-draped coffin.”

The train’s eight-hour journey attracted a million people to the sides of the tracks.

Robert Kennedy had a profound bond with minorities, the downtrodden, and the dispossessed during his 82-day campaign.

Read more at History.com about the Robert Kennedy funeral train.

Hello. It’s Me. Upper Darby’s Todd Rundgren Gets Into Rock Hall of Fame

Last Call, a Movie Based on Growing Up in Upper Darby, Gets Released on Friday

Pat Croce Is a Changed Man, Still Frenzied, but on a Peaceful Journey of Self-Discovery