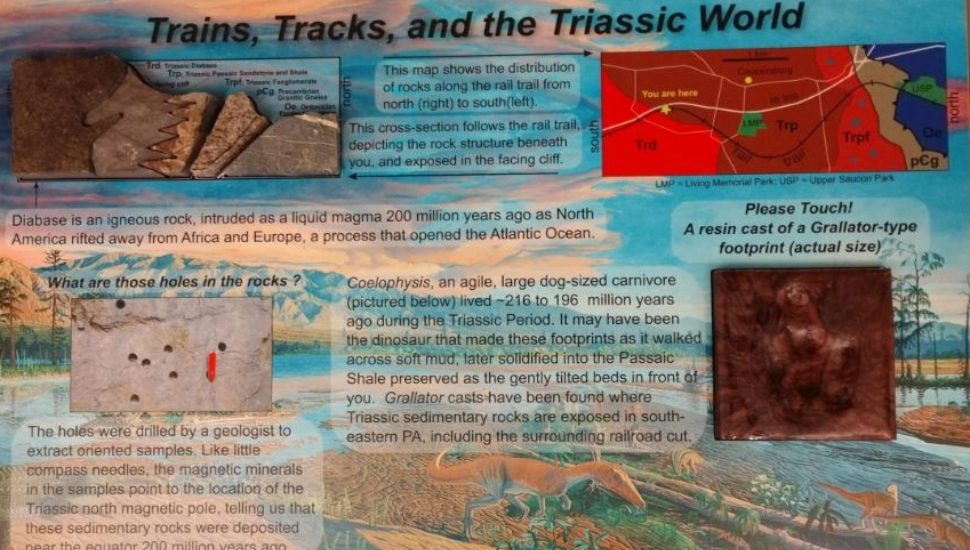 The Upper Bucks Rail Trail hosts dozens of daily walkers. But geological evidence suggests that dinosaurs may have walked there as well. A sign explaining that possibility, however, is now gone, reports Drew Anderson for WFMZ 69 News.

The signage was removed after it was vandalized. The posted data it contained came from Dr. Frank Pazzaglia, Professor of Geology at Lehigh University.

Pazzaglia’s theory on how dinosaur tracks were left in this area relates to its geologic past. At one time, the local topography was underwater. As it emerged, the residual sediment was soft enough to capture tracks, which were then preserved as they were buried by centuries of affected pressure.

Dino evidence in our general neighborhood isn’t a new discovery

Although they were located, they are no longer accessible. In 1990, “geo-vandals” swiped the set of 200-million-year-old dinosaur footprints, using a power saw to remove a 10-foot slab of rock. Experts theorize they may have been sold; fossils of this kind appeal to elite collectors who willingly pay top dollar.

The brazen theft in Coopersburg caused such ripples throughout the scientific community that dinosaur evidence in nearby Berks County was kept secret until its site was secured.

Lehigh University and the Appalachian Mountain Club cofunded the Upper Bucks Rail Trail’s sign. It is unclear when it will have the resources to replace the damaged one.

More on the loss of public information about Bucks County’s (far distant) past is at WFMZ 69 News.