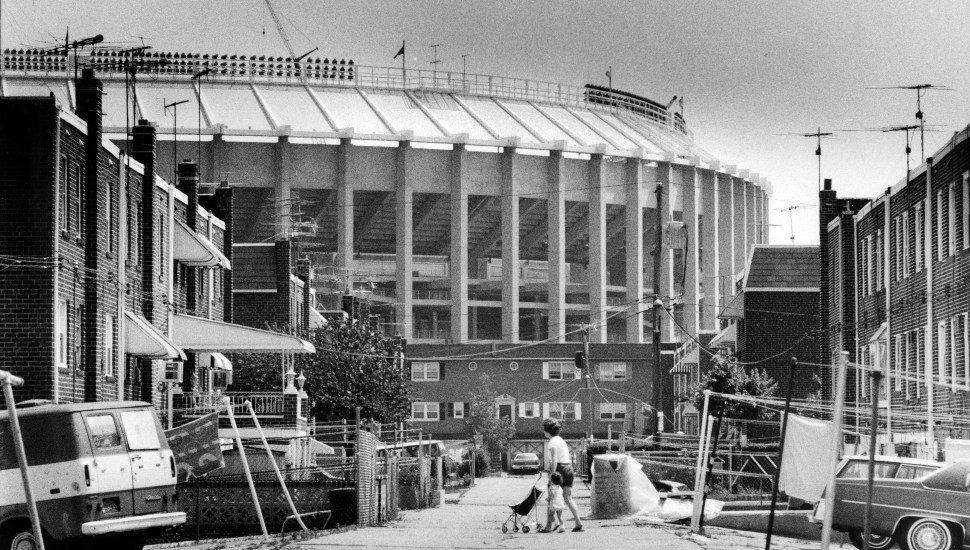 A South Philadelphia neighborhood view of Veterans Stadium in the 1980s.

Walt Disney had his secret apartment in the Disneyland firehouse.

Tom Garvey had his at Veterans Stadium, writes Stephanie Farr for The Philadelphia Inquirer.

“I was like a kid with a Willy Wonka golden ticket,” he said.

The Ridley Park native who now resides in Ambler details his life from 1979 to 1981 living in a refurbished concession stand at the Vet in his new book, The Secret Apartment: Vet Stadium, a Surreal Memoir.

There were post-game parties with the Eagles and their wives, and meet-ups with Philly sports legends like Tug McGraw, Dick Vermeil, and Julius Erving.

“I always knew this was bizarre, but when I put it together and assembled the stories I thought ‘Holy God!’” he said.

The 78-year-old stumbled on to the idea of a Vet apartment when he worked as a cashier supervisor in the Vet parking lot.

During Pope John Paul’s 1979 Philadelphia visit, Vet lots were open to visitors. Garvey had to have a crew there at 4 AM, so they stayed overnight in Garvey’s office and in an empty concession stand across the hall.

Read more about Tom Garvey in The Philadelphia Inquirer.