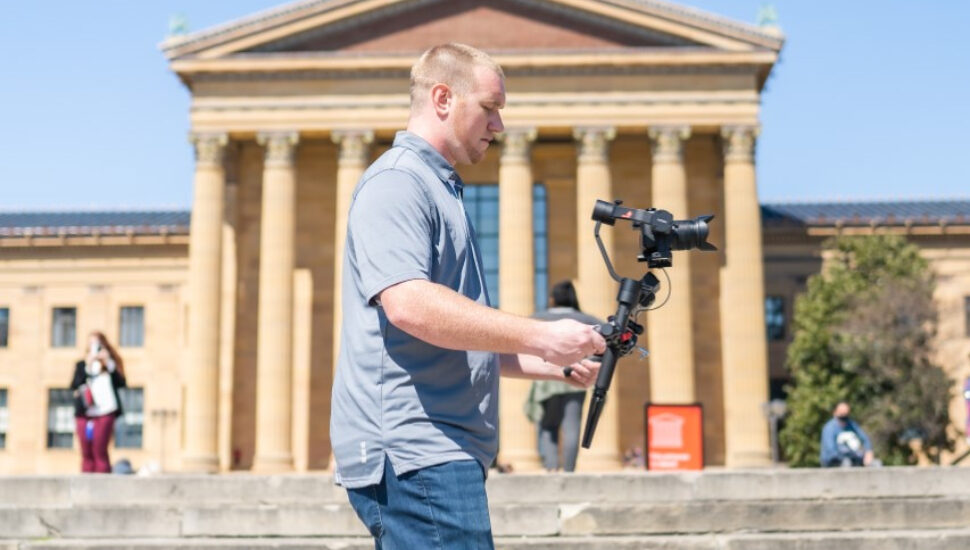 The story of Danny Apex Productions began at Rustin High School, where West Chester native Dan Diggin and his friends ran the morning announcements. Although it was years before he started his company, Diggin knew he had found a lifelong passion for producing.

“My whole life I have seen through video,” said Diggin. “It’s my train of thought. I didn’t realize that’s how my brain worked until later in life. When I watch films, I reconstruct it into my own story, similar to what someone might see in a dream.”

A man of many talents and an extensive résumé, Diggin tries to pursue new projects with a goal in mind but also with some wiggle room where he can tap his creativity.

For example, he had a landscaping startup in his early 20s. Its ultimate point was to turn every neighbor into a customer.

Once he achieved that, he ran a LEGO business out of his home. He and a small team of employees collected and sold sets. Diggin also designed custom instruction booklets, which fueled his passion for creating and attained the goal of producing his own LEGO sets to be sold in North America.

Video had taken a backseat in his life, and getting into production required major investment. Yet, he knew he had to return to doing what he loved. Accumulating his funds from all previous projects helped him found Danny Apex Productions in 2020.

Diggin is thrilled to be able to use his equipment, advance his talent, and connect with the community.

Of course, he has a goal in mind for Danny Apex Productions as well: filming and producing a Super Bowl commercial.

“Apex means reaching the peak, the pinnacle,” he said. “I live my life through my passion, and you need that passion. Otherwise, it will never work out. We are on the rise and striving to reach the top.”

Diggin and team have produced a number of videos for live events, animations, and business and individual spotlights. Recent productions include the VISTA Millennial Superstars reception and a spotlight on award winner Matrie Johnson for The Fund for Women and Girls nonprofit.

“Filming live events like the VISTA Millennial Superstar celebration makes me excited and jazzed up about the pressure,” he said. “You have to make sure the cameras are ready, and everyone has 45 seconds to go. Being in a live event like that with over 300 people is what drives me.”

Speaking with VISTA Millennial Superstars and Matrie Johnson allowed Diggin a unique way to get to know people through interviewing them. He said it reaffirms the good things that their peers and colleagues have said about them, and he can tell why they were chosen for that award.

As an Award-Winning Construction Company, Pancoast & Clifford’s Fingerprints Are All Over Bucks County