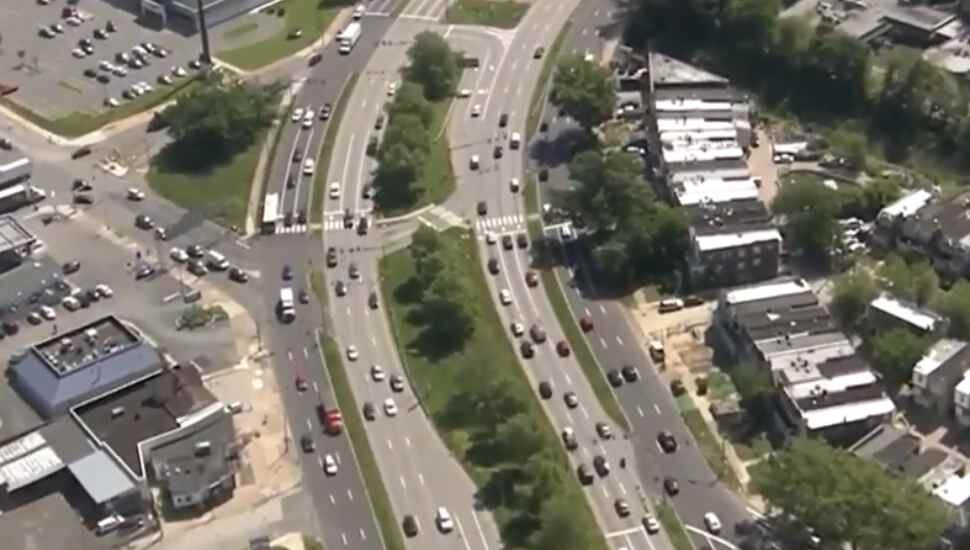 Image via CBS Philly at YouTube.
The Roosevelt Boulevard, whose high-speed multi-lane conditions routinely make it a challenge for drivers and pedestrians.

Like many Phila. highways, the Roosevelt Boulevard (Rte. 13/Rte. 1) was never meant to do what it is now doing daily. The highway, opened in 1914, once merely connected Broad Street with Torresdale. Now, however, its stretch into Feasterville-Trevose must accommodate thousands of drivers and pedestrians. Claudia Lauer reported the situation in the Los Angeles Times.

Cameras have increased safety, precipitating a 91 percent drop in speeding. But the fix is temporary; the legislative approval for usage expires next year.

The city has been weighing longer-term fixes.

One is to restrict the center lanes to express traffic only; another cuts overall speed limits and redesignates some car lanes for cyclists and mass transit only.

Neither idea is inexpensive. Financing with federal infrastructure funds is under consideration.

The City of Phila. is concerned not only for the safety of the public in general but also for the communities of color that have nested along the Boulevard. Some watchdog organizations see the statistical impact on vulnerable populations as a call for equity.

More on the present and future condition of the Roosevelt Boulevard is at the Los Angeles Times.

Ben the Turkey, Social Media Star from Bensalem, Turns Out to Be Something of a Ham

Holy Cow! Escapee Bull Runs with the Traffic on Route 113 in Hilltown Township