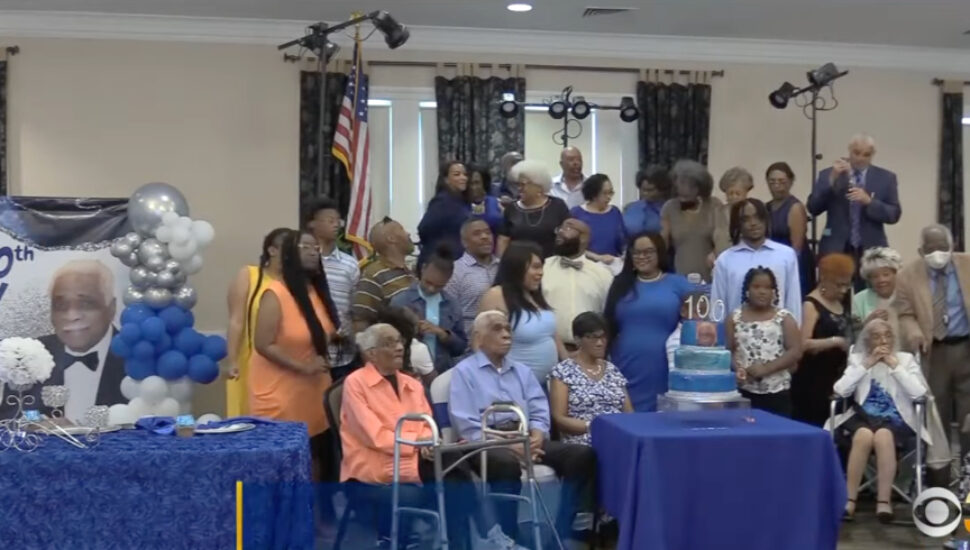 Image via Youtube.
Henry Jacks, second from left at bottom, celebrates with family.

Jacks, a World War II veteran and the first African American postal worker in Coatesville, started bowling in his late 40s. His best score was 269, but now he ranges between an average of 130 to 140.

“We have quite a few bowlers that are in their 90s, but Henry is the only one I know of who’s reached 100. He is a remarkable guy,” said Felecia Meakim, a longtime worker at Palace Bowling.

As you only turn 100 once, there were four days of celebrations planned in his honor.

Students from St. Joseph’s Elementary got the ball rolling with a party at the bowling alley, and then family members gathered at Jacks’s Friday night league. Another family event, with over 100 attendees, took place on his actual birthday a few days later. For the final get-together, workers and bowlers at Palace Bowling chipped in to buy Jacks a large cake.

“He has a little problem with standing, but he’s still doing well. How long he is going to continue bowling is not our call,” said Carol, his wife of 29 years.

Read more about Henry Jacks in the Daily Local News.

Meridian Bank House of the Week: Strike While the Iron's Hot; This Newtown Estate Has a Bowling Alley

In Post-Holiday January, Here's How to Silence Those Kid Choruses of 'I'm Booored!'

Author of ‘What Killed Downtown?’ Considers Future Possibilities for Norristown on Its 210th Birthday