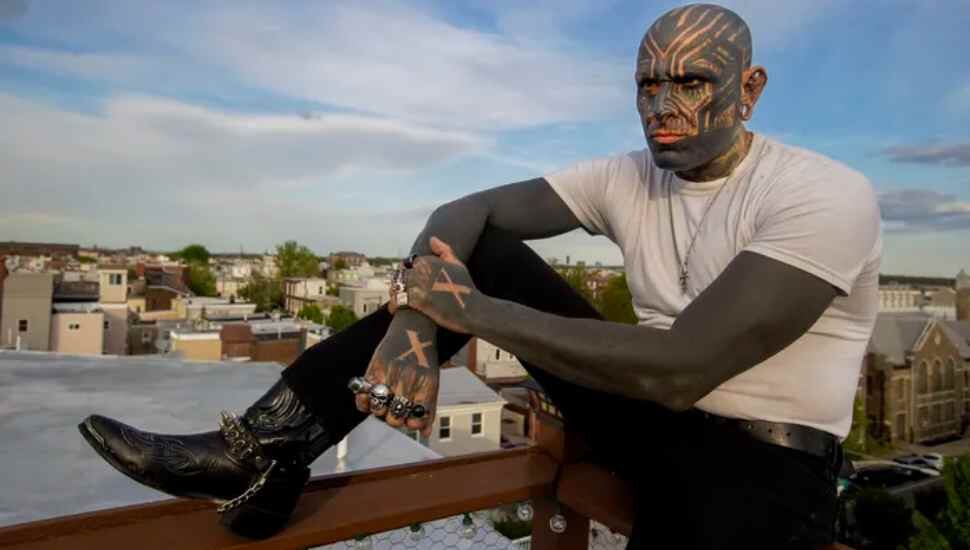 Bucks County’s Richie “Bones” Grossman has gotten a lot of ink. He hasn’t been profiled repeatedly in the newspaper — although this item on him came from Jason Nark in The Philadelphia Inquirer. Grossman’s ink is related to his numerous tattoos and the blackout option he’s used to alter them.

Grossman (a graduate of Council Rock High School) has, over the course of years, covered almost 70 percent of his body with art, including his face.

The markings have come to signify a wilder time in his life, a period he now would like to close and move on from.

Doing that through elimination of his tattoos is generally a hit-or-miss proposition.

The two traditional approaches — each yielding mixed results — are to overlay existing tattoos with additional artwork to transform them into something else. Or undergo laser treatments to have the injected ink removed.

The former process can yield muddled results. The latter can require multiple sessions that can get expensive without being wholly effective.

But Grossman instead opted for a blackout, a relatively new wrinkle in the skin-art trade. He had the work done by a Phila.-based tattoo artist who is a leader of the trend.

In Grossman’s case, the new look may be startling, but people he meets are more intrigued than repelled.

“I’ve never really had any bad interactions,” said the Council Rock High School grad. “I felt like it was an evolution of my soul and my spirit, to move on from things.”

More on the blackout option for tattoo revision is at The Philadelphia Inquirer.

Rev. Kathryn Dinkelacker-Swan Seeks to Bolster Church Attendance by Getting Some Skin in the Game