Truman High School Holds on for PIAA-Recognition of Girls Wrestling 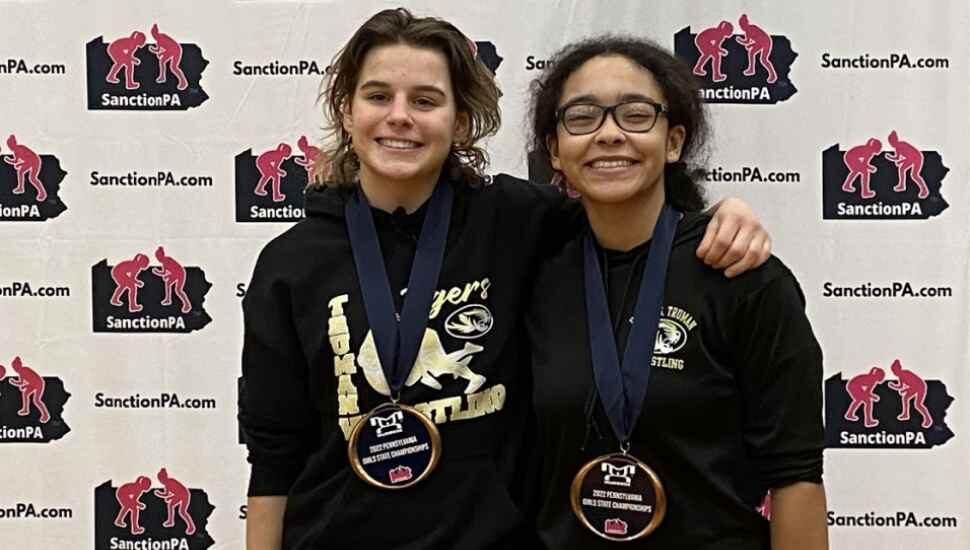 Image via the Lower Bucks Times.
Stacy Couillard (l) and Isabella Diaz, two Truman high school athletes who distinguished themselves recently on a statewide level on the wresting mat.

Girls’ high school wrestling is becoming one of the fastest-growing sports nationwide.

Truman’s entry into the ring will make it the 37th competitor in Pa. Interscholastic Athletic Assn. (PIAA). Sixty-four additional schools are needed to propel the female competitors to PIAA-sanctioned status.

“This is an opportunity to do something other schools are looking into and be a leader for them,” said Truman’s athletic director Rob Findlay. “As girls wrestling becomes a PIAA event, we’ll be at the cutting edge of it.”

Two students have already distinguished themselves on the mat, placing well in the Pa. State Girls Wrestling Championship: Isabella Diaz, sophomore, who took fourth; and Stacy Couillard, junior, who took hold of fifth.

“Years from now, girls will look back and see the impact these two made as trailblazers into the most popular emerging sport in the nation,” said Findlay.

Absent any other arenas in which to compete, the girls honed their skills on the boys’ team, where victories proved especially sweet. “There is always a great reward when you win against a guy,” said Dias.

More on the local emergence of girls’ high-school wrestling is at the Lower Bucks Times.