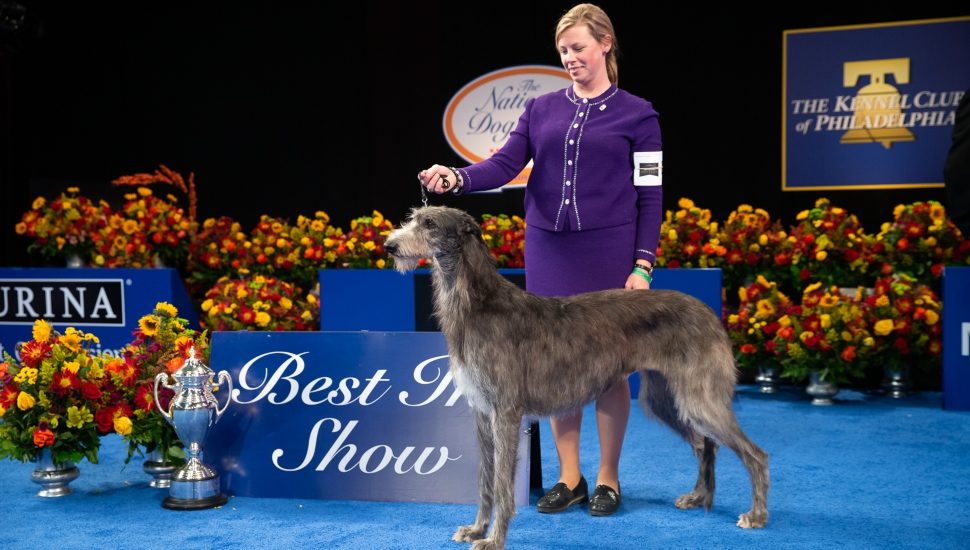 Image via Steve Donahue at SeeSpotRun.
Claire, the Scottish Deerhound, and her handler, Angela Lloyd.

The 20th annual National Dog Show Presented by Purina broke new ground in crowning the first-ever back-to-back Best in Show Winner. The results, made known exclusively on NBC on Thanksgiving Day, were embargoed since the event wrapped on Nov. 20, leading to a big reveal for the television audience.

Claire, a four-year-old Scottish Deerhound, was awarded one of dogdom’s highest honors, outshining more than 1,500 other entrants across 187 breeds from across the U.S.

Her closest competition, the other winners of their respective groups, were:

The coverage of the Kennel Club of Philadelphia competition aired from noon-2 p.m. in all time zones following the Macy’s Thanksgiving Day Parade and before football-watching took over the day. The broadcast is seen annually by a total audience of over 20 million in what has become an American holiday tradition. An encore presentation aired in primetime on Saturday, Nov. 27.

The new breed certified by the American Kennel Club (AKC) for the 2021 competition was the Biewer Terrier (pronounced bea-ver, like the dam-building animal). It competed in the Toy Group.

Audiences wanting to watch the competition for themselves can still catch it online. It can be streamed at NBC Sports online or through the NBC Sports app, available on the iTunes App Store, Google Play Windows Store, Roku Channel Store, Apple TV, and Amazon Fire.

Actor John O’Hurley (Seinfeld, Dancing with the Stars) again hosted the broadcast, alongside expert analyst David Frei, one of America’s foremost experts on all things canine.