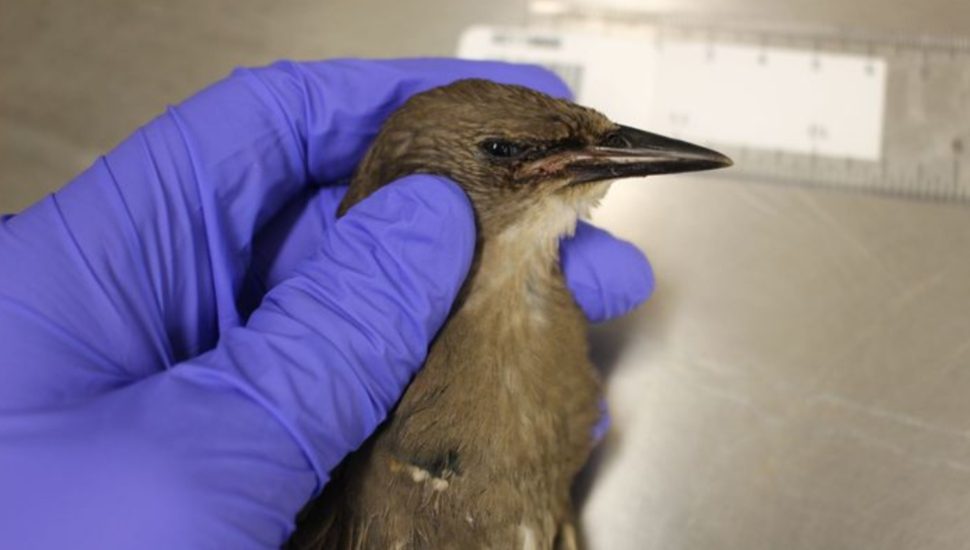 Image via Penn Vet New Bolton Center at The Philadelphia Inquirer.
A fledgling starling being examined for a mysterious disease plaguing area songbirds.

Groups of songbirds have recently been turning up dead throughout Bucks County and the greater Delaware Valley. Their cause of death remains a mystery to scientists and wildlife officials, writes Frank Kummer for The Philadelphia Inquirer.

Similar deaths have been reported in other parts of Pennsylvania and across several other states, going back to April.

Experts characterize the rash of songbird deaths as unusual.

Various species affected by the unknown malady are:

They have all been found with ocular and neurological issues. Symptoms can include swollen eyes with a crusty discharge, erratic flight, partial leg paralysis, stumbling, falling over, and excessive vocalizations.

According to Lisa Murphy, a veterinarian and director of Pennsylvania Diagnostic Laboratory System at New Bolton Center in Kennett Square, scientists consider the illness “worrisome.”

“Not one disease or disease agent jumps,” she said. “This does seem to be something unique and unusual.”

The U.S. Geological Survey (USGS) saw fit to recommend that people stop feeding birds. Its experts conjecture that the sickness spreads from bird to bird when they are in close proximity. The elimination of common gathering spots, such as feeders, birdbaths, and birdhouses, may drive down infections, much in the same way social distancing among humans knocked back COVID-19 numbers.

“In order to protect the birds we all love, we are following the guidance of numerous partners and concur with the USGS in recommending that everyone remove their bird feeders and birdbaths at this time,” said Diane Smith, director of the Bucks County Audubon Society. “Now is the time to clean, sanitize and store your feeders and baths.”

To untangle the mystery, Pennsylvania officials are now asking people to report unusual occurrences of bird deaths to the Wildlife Futures Program.

Read more about the illness striking songbirds in The Philadelphia Inquirer.