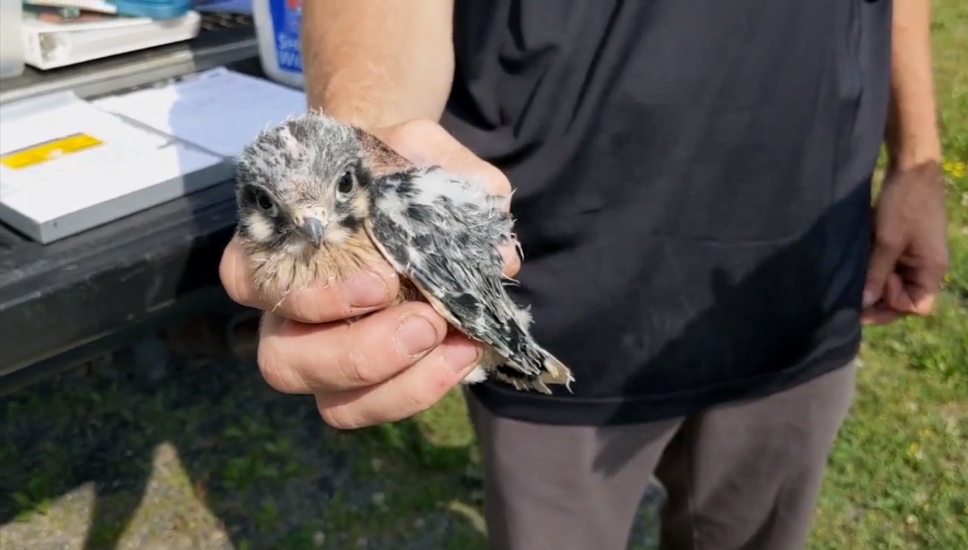 Image via WFMZ 69 News.
A baby kestrel, relative of the mighty falcon, is held just prior to being outfitted with an identification band on its leg. Tracking its ID number helps ensure a long lifespan.

The kestrel is akin to a falcon, sharing its feeding habits of swooping up small game. Kestrel populations are down locally, leading one advocate to help. Drew Anderson covered his efforts for WFMZ 69 News.

Paul (last name withheld) is a federal- and state-licensed bird expert who has been tracking American kestrels for decades.

He bands them to ease tracing their flight paths. Knowing where these birds go and why is key to improving their numbers.

The decline in kestrels is caused by loss of habitat. As forests and wooded areas give way to housing developments and shopping centers, hunting grounds for birds of prey shrink.

In their choice of nests, Kestrels have an instinct for squatting. They do not make their own; rather, they find an abandoned one (woodpecker’s dwellings are common) and move in.

Paul uses this instinct to his advantage. He installs bird boxes throughout Northampton County, and to date, he has created at least 100 nesting places. A nearby colleague has dotted Bucks County with about 80.

Since he and his Bucks County counterpart have been putting up this special avian housing, he’s noticed an increase in local kestrel numbers.

More on the support of this specific breed of bird is at WFMZ 69 News.