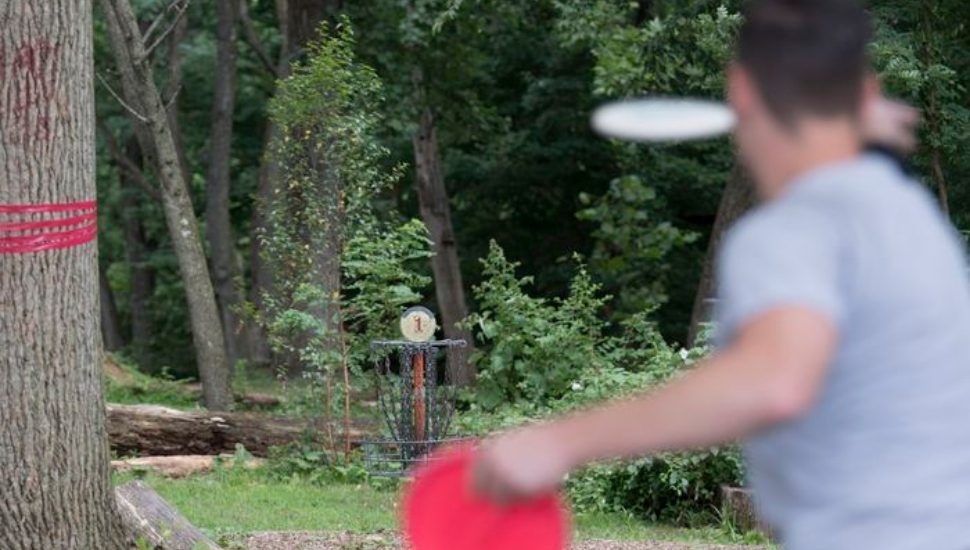 Disc Golf first became a thing in the mid-1970s in (where else?) California. In the ensuing decades, its popularity spread nationwide, including to the Philadelphia suburbs. One of the best courses in the U.S. is in Bucks County, writes Nick Vadala for The Philadelphia Inquirer.

Disc golf, that Frisbee-golf hybrid, substitutes the a disc from the former for the ball from the latter. But the object remains the same: tee to target in as few “strokes” (tosses) as possible.

For novices, equipment purchases are relatively simple: one disc will usually do, and it can be a Frisbee. But the traditional beach-toss version is generally too light a flimsy to make disc golf playable. For more serious competitors, discs come in versions for putting, mid-range throws and drives. Gear is sold online and locally at D-Town Disc Golf in Doylestown.

According to the Pennsylvania Department of Conservation and Natural Resources, the course at Tyler State Park is nationally ranked as one of the best. It’s a massive 36 holes, with 18 holes nestled into each of its east and west sides. The landscape across both will challenge golfers with open areas, wooded spots, and water hazards.

Course maps with rules and scorecards are available at the park office and at the Upper Plantation Picnic Area parking lot.

Read more about the best places to play disc golf in The Philadelphia Inquirer.

To Celebrate the Super Bowl, Several Philadelphia Eagles Will Be Making a Stop in Bucks County This Weekend