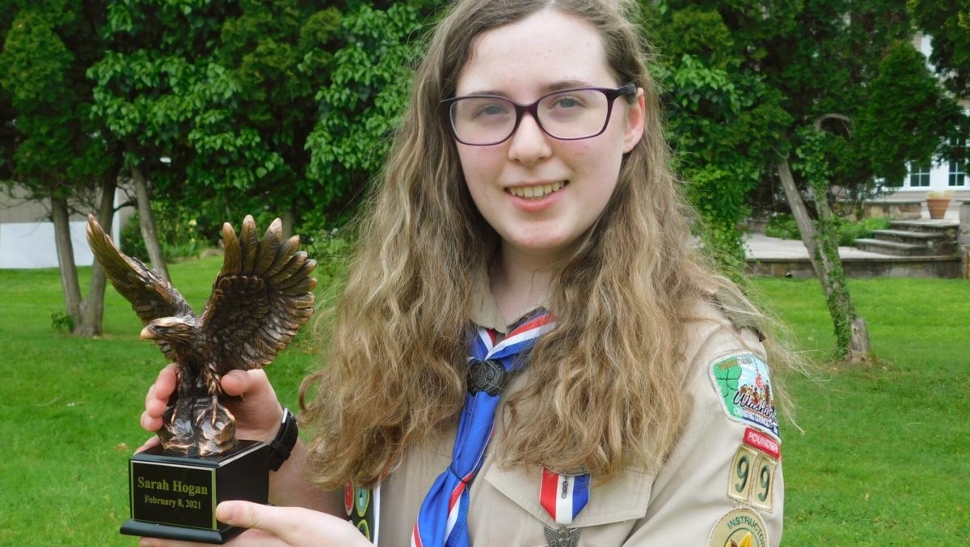 Yardley’s Sarah Elizabeth Hogan now soars as an Eagle — an Eagle Scout, that is. Hogan received her official badge at a recent Court of Honor ceremony, reported Jeff Warner for Bucks Local News.

Hogan entered scouting in the first grade, with her twin brother. Since their mom was den leader, Hogan participated in the activities as well.

She formalized her membership in 2019 and vaulted through the levels: Scout, Tenderfoot, Second Class, First Class, Star and Life.

“I haven’t seen another Scout who puts others before themselves like you have,” Troop 99 Scoutmaster Michael Marschean told Hogan at the induction.

“Sarah’s values are self-evident,” he continued.

“When I look at Sarah, I see character, leadership, citizenship. I see a true Eagle. It’s not what she does; it’s who she is.”

Hogan commented on her accomplishment: “Scouting has given me opportunities and new experiences. Camping trips gave me experiences with climbing, boating — even encounters with bears. I worked very hard to complete all the requirements … to join the inaugural class of female Eagle Scouts.”

More on this achievement, including Congressman Brian Fitzpatrick’s appearance at the Court of Honor, is at Bucks Local News.