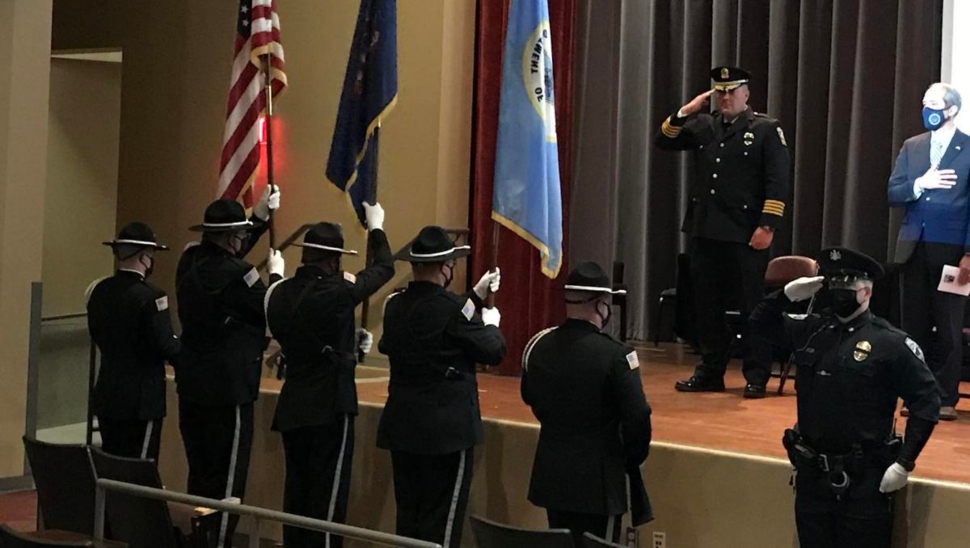 Image via Patrick Cloonan at the Indiana Gazette.
The colors were presented by an honor guard from the State Correctional Institution at Pine Grove at the start of the 2021 Indiana County Law Enforcement Memorial Service in the Toretti Auditorium at the Kovalchck Convention and Athletic Complex, Indiana, Pa.

This May, Peace Officers’ Memorial Day and National Police Week overlap. That convergence provided a fitting timeframe to remember Pennsylvania’s fallen officers. In memorializing lost men and women in blue, an Indiana, Pa., service recalled a Bucks County Park Ranger in a stirring service covered by Patrick Cloonan for the Indiana Gazette.

In June of last year, Park Ranger Thomas E. Booz, 64, passed away from complications related to COVID-19. He was the first Bucks County employee and second county first-responder to succumb. He lived and worked in Bristol Township.

According to the Bucks County Department of Parks and Recreation, Booz began his service in 1988 and had a 32-year career. As a Bucks County Ranger, he patrolled the Silver Lake Nature Center.

Booz left behind a wife, stepdaughter and siblings.

At the service, Indiana County District Attorney Robert F. Manzi, Jr., remembered the bravery and steadfastness of those who serve our county and city streets.

“When we run from danger, it is law enforcement who runs toward it,” he said.

The ceremony also recognized six officers from Philadelphia, all killed while on duty.

Respect, Honor, Remember was the theme for the day. The Rev. Jack Lucas, senior pastor of Indiana’s Hilltop Baptist Church, offered an invocation and benediction.

“In a time when our country appears to be in crisis,” Lucas prayed, “God, You are in control.”

More on this moving statewide tribute with local resonance is in the Indiana Gazette.