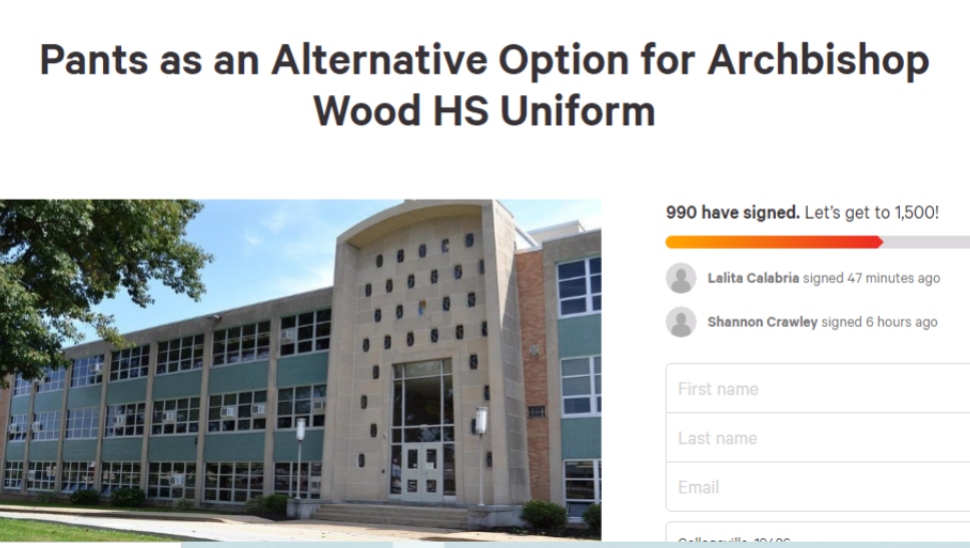 Wood’s policy of skirts for female high schoolers was set by the Archdiocese of Philadelphia. Its justification was to ensure “modesty and decency” on campus.

But the calls for equality are gaining traction.

“It’s a new day; it’s a new era. [Skirts are] like that kind of old-school thinking,” said Karen Duffy of Hatboro.

A sibling of a present student — a Wood alumna herself — launched a policy-change petition. It states that beyond keeping up with modern-day appearances, the issue is also a matter of “safety, dignity, and comfort.”

What the students want is the option. They envision a day when, in the workforce, they will choose for themselves what to wear. In preparation for that eventuality, they seek some autonomy now.

“If they want to wear short-shorts and all that kind of stuff, I could see people being upset. But they’re pants,” said Anthony. “I think everything evolves. And I think this is just one of them.

“If there’s somewhere in the Bible [that] says pants [are] a problem, we’ll address it,” he continued. “But I don’t see it”

More on the uniform controversy is at Fox29 News.