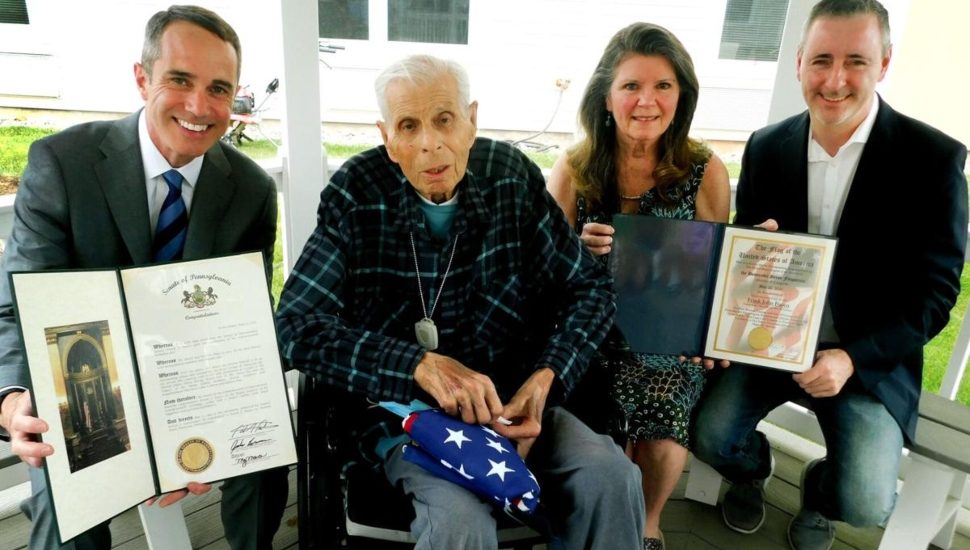 Surrounded by friends, families, and political dignitaries, Frank Fuoco marked his 97th birthday at his Newtown assisted-living facility. The occasion became an opportunity to thank him for his historic service, reported Jeff Werner for Bucks Local News.

State Senator Steve Santarsiero gave him a citation from Harrisburg.

The recognition came not only for Fuoco’s sheer longevity but also his World War II service. Fuoco was a crewmember aboard the USS Missouri, the ship on which Japan’s “Instrument of Surrender” was signed on Sept. 2, 1945.

“This is a flag that you served,” said Fitzpatrick, presenting Old Glory, sharply folded into a triangle. “We wanted to honor you for being a World War II veteran. You helped free our entire planet from tyranny.”

His daughter Lynn Goodwin related her father’s recollections of coming home as one of his proudest of days.

“He said the streets and bridges in San Francisco were lined with millions of patriotic Americans waving flags and cheering all the service members,” Goodwin said. “It was a day that he will never forget. Even if he lives to 100.”

More on this veteran, one of only about 1.8 percent of U.S. World War II servicemen still alive, is at Bucks Local News.

Historic Cemetery in Wayne Seems to Have No Owner. Here’s Why That’s a Problem