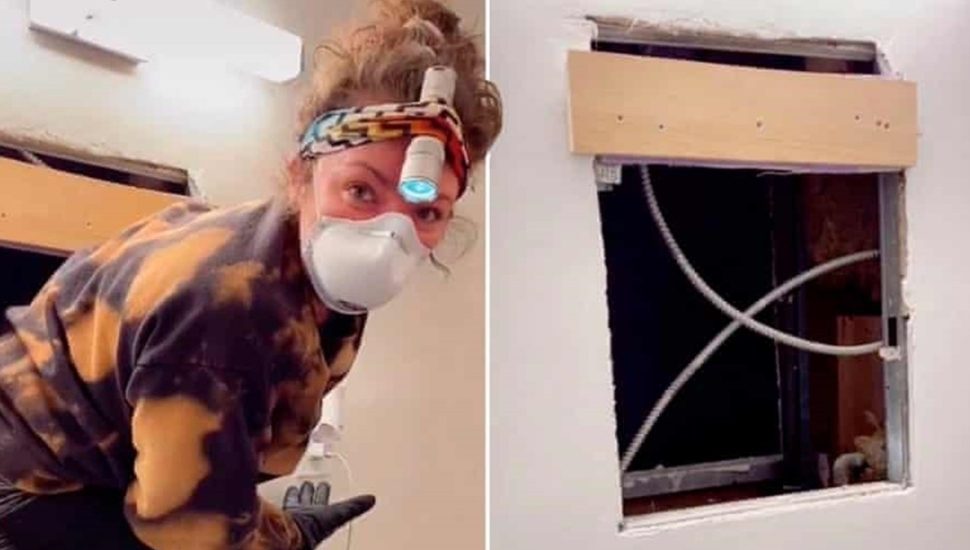 In a time when we’re so fractious, the internet appeared to unite on one opinion:

The video was creepy.

The series of TikTok posts is a 60-second horror movie. An icy wind in her bathroom led New York City resident Samantha Hartsoe to discover an entire room behind her mirror.

Let that sink in. She had an entire room behind her bathroom mirror.

Reading the videos’ comments is like sitting in a movie theater during a slasher flick. As Samantha climbed through the hole behind her bathroom mirror, determined to explore the mysterious room, viewers implored her to stop.

They warned her the urban legend film Candyman starts this way. They told her to just leave. They told her whatever lives in the ominous room would “get” her.

Samantha emerged from the hole no worse for wear – yet, anyway. If something possessed her or took Samantha’s form in that freaky hole, it will take a few days for anyone to realize it.

I found the internet’s universal support for Samantha reassuring. Sure, Samantha was determined to run up the metaphorical stairs while the audience screamed for her to bolt for the front door. But everyone commenting on the videos agreed with Samantha.  The room was preternatural. She was in danger. She should leave.

I, myself, have never experienced that kind of support.

It started with my single-girl apartment, which had a tiny door in the broom closet. The door opened to a tunnel. Running behind the apartment’s wall, the tunnel terminated at a second tiny door in my bedroom.

My bedroom. I was supposed to sleep in a bedroom with a tiny door in the wall?

The apartment was in an old house. I don’t know what the generations before me used that tunnel for. But I have seen enough Unsolved Mysteries and Tales From The Darkside to know weird tunnels are where the bodies get hidden and the monsters lie in wait.

So I blocked the doors.

I was safe for years. So imagine my surprise when my new husband moved in and expressed confusion over the series of barricades.

It was one of those moments in a marriage, the kind where you discover something about your spouse you didn’t know before you walked down the aisle. I had pledged myself to a guy who just does not believe in things that go bump in the night. He was committed to a girl fearful of closets, under the bed, and the dark.

Undoing our marriage proved too much of a hassle. We decided to just persevere through our differences.

And so our union has been a series of compromises.

I don’t go in the crawl space behind our rec room sofa. If I wanted to poke around dark holes probably littered with murder victims left by a previous owner, I wouldn’t have gotten married.

He treks through the woods in the middle of the night, searching for deer. He doesn’t stress over the bears, snakes, werewolves, and Hansel and Gretel-type witches waiting to get him.

I do stress over all those things. I don’t go in the woods in the middle of the night.

We’ve built a successful union on these compromises. So I was annoyed when he recently tried to persuade me to sleep at his father’s hunting club. It’s musty and dark, with a very distressing Buffalo Bill basement and a handful of members who won’t go inside the club at night because it’s haunted by a ghost named Mary.

I was also irritated when I showed him Samantha’s video. He echoed the commenters, yelling at Samantha as she climbed through the bathroom hole. He told her not to go. He said the hidden room was eerie.

And he’s never even seen Candyman.

He was fearful for Samantha, yet he still leaves the closet door open when we go to bed.

At least Stephen King is on my side. He was discussing his new book on Good Morning America last week. He’s afraid of his basement. That’s like an oncologist warning you away from cigarettes.

They both know of what they speak.

Obviously, King knows there’s nothing in his basement. He just feels that exercising caution isn’t going to hurt anyone.

My husband has never exercised caution. It took Samantha and her bizarre bathroom to initiate his conversion. He’s not there yet, but he’s taken the first step.

I owe Samantha my thanks. If the creepy bathroom monster hasn’t gotten her yet.