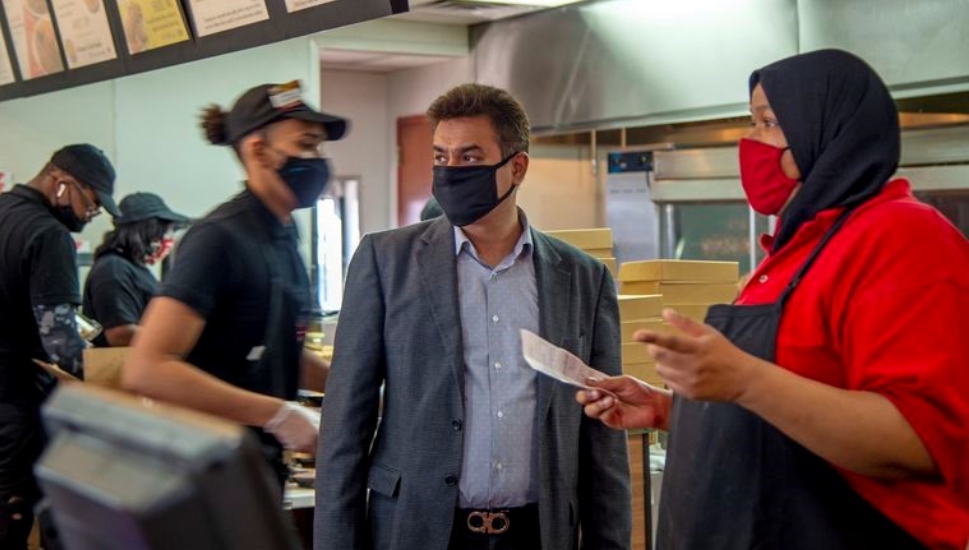 Image via: Tom Gralish, The Philadelphia Inquirer.
Entrepreneur Jay Pandya (center) meets with his crew at a local Boston Market.

Although 2020 was a challenging year for the many restaurateurs who struggled to keep the lights on amid the pandemic, Jignesh “Jay” Pandya of Newtown expanded his business dramatically, buying two well-known, but struggling, privately-held national restaurant chains.

Philadelphia Inquirer reporter Michael Klein wrote that in April, Pandya acquired Boston Market, the rotisserie chicken specialist, adding 41 locations in 2020 for a total of 324. In October, he took over the 157-unit Corner Bakery Cafe, which offers pastries, breads, breakfast dishes, and sandwiches.

Pandya, 44 and a Bensalem High School grad, is now overseeing a rebranding and redecoration of the companies’ stores. He said he is also is considering a relocation of the main offices to Bucks County and started hiring more staff, anticipating that business will improve in the second quarter of 2021. Pandya said he plans open 90 to 105 more Boston Market and 120 new Corner Bakery locations in the next year—effectively doubling its size.

By controlling the parent companies, Pandya is flipping his personal script. Pandya has been a franchisee for more than 20 years, operating dozens of Arby’s, Checkers, and Dunkin’ Donuts outlets, while controlling the real estate where the stores exist.

For about 15 years, Pandya also was a Pizza Hut franchisee with 27 locations in the Philadelphia area and Connecticut before closing them in October 2019. Pizza Hut took him and his companies to federal court, alleging that they had failed to pay franchise fees and violated terms of their operating agreements. Pandya’s attorneys countered that they were underperforming. Pandya declined to comment on the suit, which court records suggest is headed toward mediation.

Meanwhile, the Pizza Hut name is all but gone from the Philadelphia area.

In 2019, Pandya acquired rights to Brazilian fried chicken company HNT Chicken, installed his older son Ronak, then 19, as its chief executive, and began to convert some of the shuttered Pizza Huts into HNT locations. Jay Pandya said HNT performed well in the months leading up to the pandemic but was not viable during the early months of the government shutdown orders so he closed them. He said he may revive it later.

Pandya also has given up his dream to start a cricket league in the United States but is working to build cricket stadiums.

Of his purchase of Boston Market, the Inquirer cites his motivation as purely personal. “I love the food,” Pandya said. The full article, including a Q&A with Pandya, is available here.