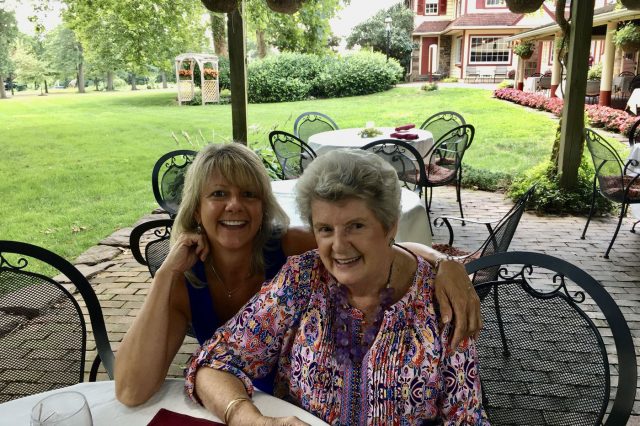 Irene Mannheims Mueller, who grew up in Olney and Cheltenham, discovered she lived a mile and a half from a daughter she had given up for adoption decades ago. Image via The Philadelphia Inquirer.

Irene Mannheims Mueller, who grew up in Olney and Cheltenham, discovered she lived a mile and a half from a daughter she had given up for adoption decades earlier, writes Kellie Patrick Gates for The Philadelphia Inquirer.

Mannheims Mueller got pregnant in 1965 aged 26 when an acquaintance raped her on the ride home from a gathering. She gave birth to baby Kathy and entrusted her to Catholic Charities that promised to find a good home for her.

The baby was adopted by a couple who lived in Holland, Bucks County. When her mother died in 2016, Kathryn “Kathy” Gossard decided to learn more about her biological history.

With help from a friend, a genealogy sleuth at Abington Hospital-Jefferson Health where Gossard manages the respiratory therapy department, she learned that Mannheims Mueller lived less than two miles from her.

Soon the now-55-year-old Gossard drove to a nearby diner to meet her biological mother. The pair hit it off immediately, and have already made more plans for the future.

“I am so thankful that we live so close to each other that we can see each other,” said Gossard.

Read more about the happy reunion at The Philadelphia Inquirer by clicking here.

Weekend Wanderer: The Thanksgiving That Almost Was