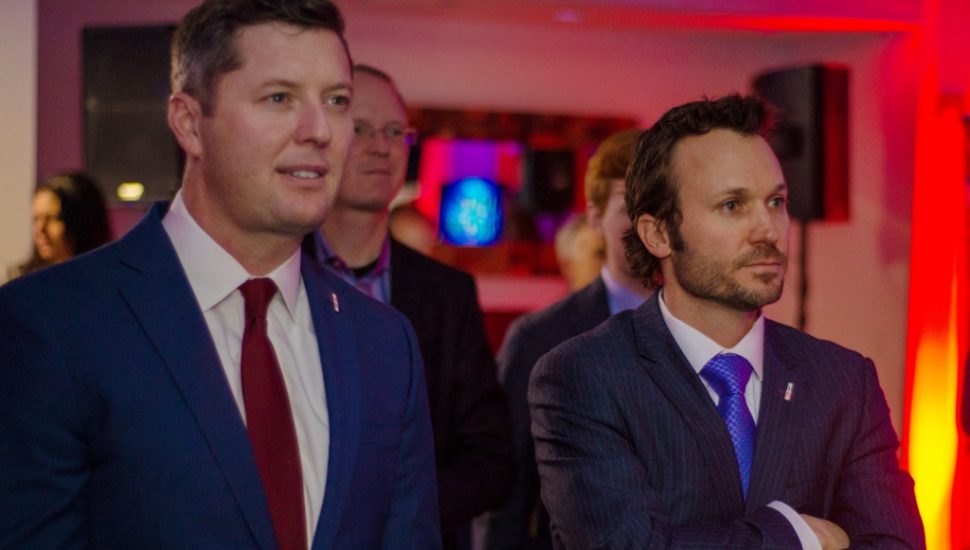 Patrick Murphy and John New own and operate Work Merk, a subscription-based engagement and training company based in West Conshohocken. (Photo courtesy of Work Merk.)

­Never ask a veteran how many people he or she has killed in the line of duty. Never assume, either, that a veteran suffers from post-traumatic stress disorder and is likely to be emotionally unstable in civilian life.

Such insensitivity can lead to problems in the workplace. Indeed, forty-two percent of veterans will leave their first civilian job within a year of starting, and a pair of veteran entrepreneurs in West Conshohocken are working to bring that number down.

“We focus on making sure workforces are engaged and productive members of their team,” New said April 5 at the company’s home base at the Four Falls Corporate Center.

Murphy and New both attained the rank of captain in the U.S. Army and served two deployments abroad: Murphy in Iraq in Bosnia, New in Bosnia and Kuwait. They took different career paths on their return to civilian life, only to find their interests and talents converging years later.

New co-founded The Hub, renting space to businesses for meetings and events in Philadelphia and, eventually, West Conshohocken. Murphy became a U.S. representative, elected to two terms from Pennsylvania’s 8th Congressional District, and he went on to serve as acting secretary of the Army under President Obama.

In 2016, New sold the Hub’s three Philadelphia locations to Convene. He kept his West Conshohocken property, which Convene did not want, and expanded from rentals into consulting. Through years of observation, he had learned that the overwhelming reason employers were calling so many meetings was simple — they wanted to improve their companies’ performance.

“Seventy percent of the reasons people get together is to get better,” he said.

This insight gave New the inspiration for Work Merk.

Murphy left the left the Pentagon in January 2016 just as the Trump administration was taking power. With his resume, he could have had his pick of any executive position in the county, but he chose to sign on as Work Merk’s executive chairman because he recognized New’s passion for worker engagement. He also felt a kinship with the fellow veteran. The two had met when Murphy was a congressman, renting office space at The Hub.

“For me, John is one of the nation’s leading vetera-preneurs,” Murphy said.

Too often, New said, an unengaged worker will check out of a job without bothering to resign, an attitude may be sums up in the phrase, “I quit, but you don’t know it yet.” He sees his role as getting workers off of what he calls “the hamster wheel.”

While veterans are not Work Merk’s sole concern, they do face specific challenges in the transition to civilian life. Millennials have a similar problem in adjusting to the adult world, with 29 percent leaving their first job after a year. In both cases, high expectations can lead to low job satisfaction. Veterans who once made life-and-death decisions and millennials who once excelled in school need to feel their workplace contributions are important and valued.

“Most veterans want to live a purpose-driven life,” Murphy said.

Companies are looking for trained leaders, and veterans have training in abundance, New added, but when they are not understood, it is the first step toward a mismatch.

“The shift to civilian work is very foreign to us,” he said.

On the other hand, Murphy said, American veterans have consistently proved themselves to be civic assets who have a high rate of entrepreneurship compared with the population at large, he said, and some of the most iconic American brands, such as Johnson and Johnson, Comcast, Verizon, Walmart and Federal Express.