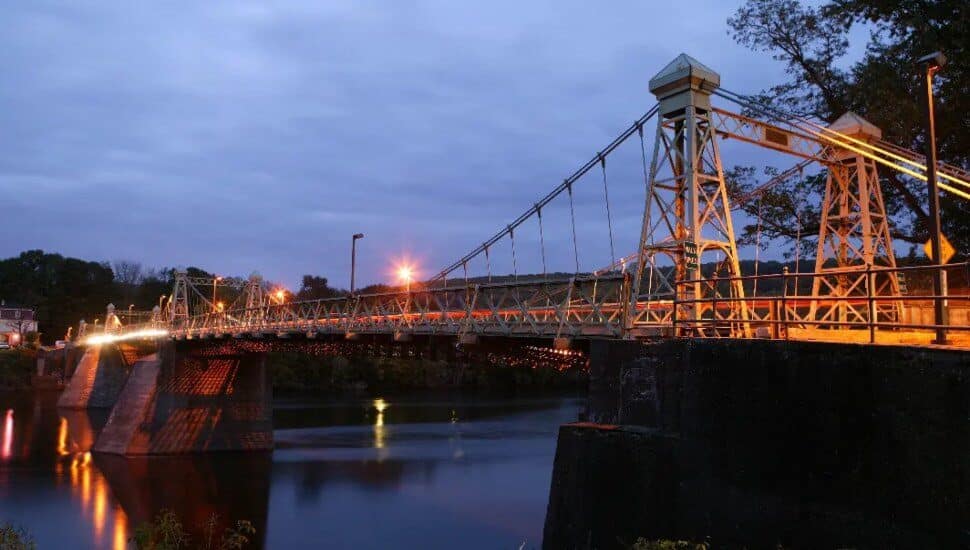 Image via Delaware River Joint Toll Bridge Commission
The bridge just celebrated 100 years of service and transportation in the community.

One of Bucks County’s most famous bridges recently celebrated a major milestone, and the community is taking notice of the event. Jeff Werner wrote about the local bridge for the New Hope-Lambertville Patch.

Three days later, the states of New Jersey and Pennsylvania finalized the purchase of the bridge. Each state provided matching $25,000 checks to complete the $50,000 transaction.

The purchase had been set up by the former Joint Commission for Elimination of Toll Bridges, predecessor of the current Delaware River Joint Toll Bridge Commission.

The Riegelsville Bridge is a rare multi-catenary vehicular suspension bridge. It was designed and constructed by John A. Roebling’s Sons Company.

“This bridge is a very unique and historically significant bridge,” writes the website HistoricBridges.org, which gives the bridge an 8 out of 10 rating for both national and local significance. “Its design is unusual because it contains multiple, relatively short suspension spans. Most suspension bridges that are familiar today are much larger bridges that contain only two suspension towers. This bridge contains four.”

The bridge was rehabilitated in 2010 when its national bridge standard rating was changed from structurally deficient to functionally obsolete.

Read more about the Riegelsville Bridge in the New Hope-Lambertville Patch.

Lower Makefield Native, NFL Hall of Famer, Remembered for His Contributions to Football

Delaware River Ranks Among the Top 10 in the Country for Tubing, Other Fun Activities