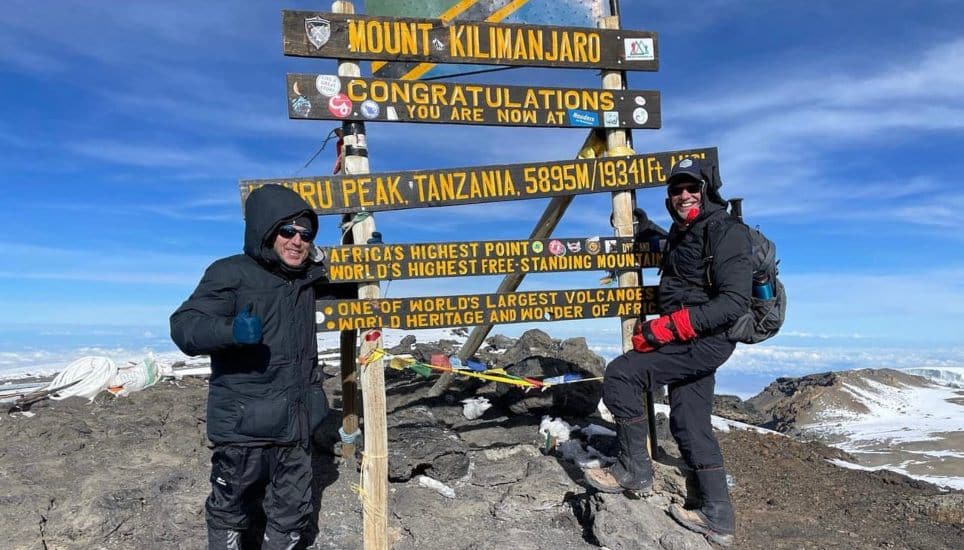 Image via Firstrust Bank.
At the Mount Kilimanjaro summit.

Despite being home two weeks after a life-changing climb of Mount Kilimanjaro, Firstrust EVP Michael Dinda still sported the sunburnt face he got during the adventure.

His climbing partner and colleague, Seth Mackler (EVP, commercial real estate finance), was less animated. But it was clear that the impact of a multi-day climb to the top of the nearly 20,000-foot ex-volcano was still resonating in him as well.

Dinda and Mackler shared their epic tale with colleagues at the Firstrust Horsham office.

This year, BBBS launched a bold fundraising campaign based on donors contributing to a “Big Adventure” experience. The 2022 edition of that adventure was to ascend Mount Kilimanjaro.

Mackler, who learned of the initiative through a BBBS business connection, floated the idea of participating to Dinda, a colleague with climbing experience.

The two agreed to take on the challenge.

They then turned to Firstrust leadership for support, and the bank readily agreed, seeing the effort as rooted in its ongoing role in community support.

After weeks of preparation, the pair left for Tanzania, met with their guides and fellow climbers, and embarked on the three- to four-hour drive to the trail that would lead them up Kilimanjaro.

From there, the party — 19 climbers and 10 porters — set off on a four- to five-mile walk through the jungle.

Dinda was particularly taken with the assisting crewmembers.

“The guides were fantastic,” he said. “We’d be struggling along, and they would march right by, passing us easily, carrying heavy tarps filled with our gear — chairs, tents, food — on their heads. They were so accustomed to the altitude, it didn’t affect them.

“They were also fun to hang out with.

“They had so little, but they seemed so content.”

The Rigors of the Climb

The journey was segmented: Seven days would be dedicated to the ascent, one to climbing down.

A steady concern was altitude sickness, a condition resulting from the thinly oxygenated air at elevations above 8,000 feet. The attention to it among the members of the party was well placed; in extreme conditions, it can be fatal.

Another challenge were the temperature swings.

Dinda reported that it wasn’t rare to experience mornings of 20 degrees, midday heat of 80 degrees, and nighttime chills of 45 degrees.

He found it necessary to adjust the forward-thinking, risk-attentive orientation that were key to his financial-services career.

“I was asking the guides about Day 7,” he remembered. “And they wisely advised me, ‘We shall address Day 7 at the end of Day 6.’”

A Brief but Necessary Respite

At the halfway point, the party celebrated its progress. In the high altitude, Dinda danced joyfully but become quickly winded.

But as tough as the bodily punishment was, mental fatigue may have been worse.

Mackler recalls seeing it and commenting, “We’re going to climb that?!

“I’m scared of heights,” he continued. “But I figured that if everyone else can, I can.”

Mackler was experiencing a buzzing in the ears and being off balance. “We had to be careful of falling 30–40 feet on rocks below,” he recalled.

The physical effects of the height led Dinda to become sleep deprived. “I was getting maybe two, three hours a night. It was the hardest part.”

The bankers had bonded so closely with their fellow climbers that they committed to reaching the top of Mount Kilimanjaro not only themselves but for the party as a whole.

A fellow adventurer — a Big Brothers, Big Sisters representative who had spearheaded the fundraising plan that underpinned the entire trek — was suffering greatly from altitude sickness.

Dinda stayed with her, ensuring she didn’t give up and encouraging her to the top.

The reach of the summit was a joyous occasion. Both men were brought to tears by the impact of their accomplishment.

Dinda described it as “…going from the lowest low to the highest high.”

In the aftermath, Dinda and Mackler have sifted through their thoughts on this life-changing experience. They compiled a list of takeaways they intend to bring to their professional lives:

Abell’s reaction to the Firstrust employees’ success was a mix of deep admiration, heartfelt appreciation, and downright awe.

“I was proud of them for just taking on the challenge – whether or not they were successful or not,” he said.

“But the fact that they reached the summit of Mount Kilimanjaro — the emotional, spiritual, physical challenge of all that and the sense of accomplishment they have — I’m really proud to share in that with them.”

In sharing the adventurers’ tale organization-wide, Abell positioned the achievement of Dinda and Mackler as a stellar example of being “Firstrust strong.”

He found their experience packed with professional takeaways on leadership:

“These are the things that we also recognize as the keys to our success,” Abell concluded.