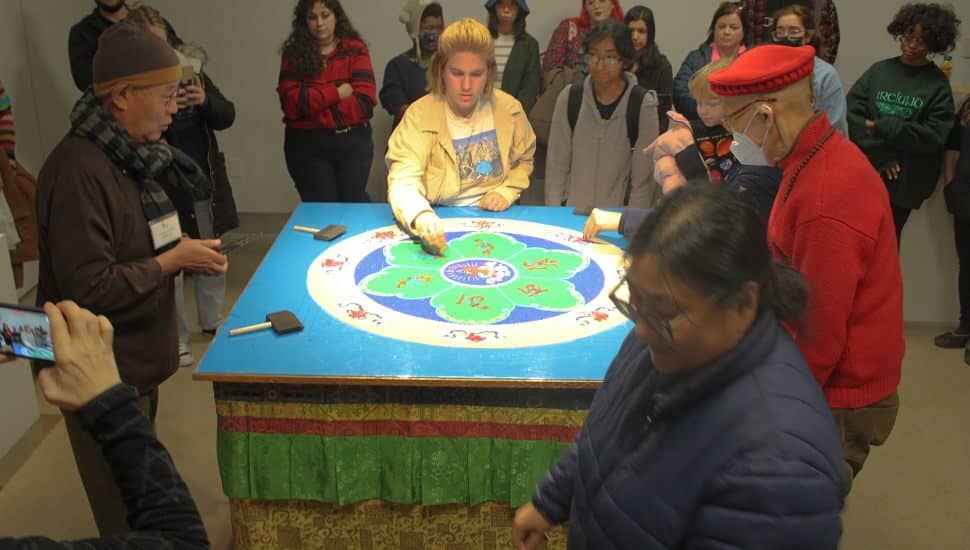 Image via Alan Smithee,
Losang Samten (l) guides participants at a Penn State Abington ceremony to dismantle the sand mandala he created, symbolically clearing feelings of grief or loss in the community.

Using a series of tapered metal rods that he filled with colored sand, Samten meticulously laid out the work on a raised square table. In almost a grain-by-grain process, the piece emerged, bringing forth significance that was both artistic and spiritual.

He identified it specifically as a “Amitābha Buddha mandala.”

“And the idea is that you call upon Amitābha Buddha to transform the grief and the loss into this infinite light of wisdom and compassion.”

Salguero said that in the post-pandemic period, Samten’s creation was especially poignant.

He described it as “…a way to honor the death and the loss and the grief and the hardship that all of us have experienced during the pandemic.”

Not a Passive Art Experience

But this creation and its message was not a passive art experience that visitors encounter, view, and move on.

Its message hinges on action.

Therefore, upon completing this specific mandala, it was incumbent for the community to unite to destroy it.

Erasing the Amitābha Buddha mandala is integral to its function as a reminder of the reality of impermanence.

“We don’t cling to things,” Salguero told the assembled students and faculty. “Even though they’re beautiful and it’s really hard to do, we let things go.

“And maybe that’s also how we approach grief and suffering: to let that go into the lightness of Amitābha Buddah.”

A Pinch at a Time

With that, Samten began removing bits of colored sand — no more than a pinch at a time — from the outer edges of the sand mandala and sprinkling them gently into the center.

As he continued, he then invited attendees to come forward, take one of the small paintbrushes that had been supplied, and sweep portions of the artwork into the center of its display table.

To the sounds of a flautist playing a large, Tibetan instrument, the sand mandala began losing its geometric boundaries. Grain by grain, its vibrant hues were degenerating into a small pile of gray grit.

Samten then explained that the significance of the sand mandala was meant to be something of a steady reminder, despite its fleeting nature.

Toward that end, he provided small paper envelopes into which the crowd could seal some of the sand and take it home as a visual cue to the healing power of letting go.

When event attendees had taken their samples, Samten scooped the artwork’s remnants into a vase.

He carried it outside to the campus duck pond to pour it in.

Salguero explained that its disposal would be safe.

“The color of the sand is environmentally safe,” he told the assembly. “So, it’s okay in the pond. We’re going to pour this into the pond and allow the water to take the sand and emanate those blessings across the whole campus.”

And in the pale sunshine of an early Dec. afternoon, that’s exactly what happened.

Again, attendees were called forth to tip the vase toward the dark water, enabling a sandy-gray stream of granules to enter the still, dark waters.

Once fully disposed, the crowd silently drifted to other priorities, other tasks. But the quiet peace of the ceremony in which they had just participated seemed to follow them.

Penn State Abington offers an affordable, accessible, and high-impact education resulting in the success of a diverse student body. It is committed to student success through innovative approaches to 21st century public higher education within a world-class research university. With more than 3,000 students, Penn State Abington is a residential campus that offers baccalaureate degrees in 24 majors, undergraduate research, the Schreyer honors program, NCAA Division III athletics, and more.