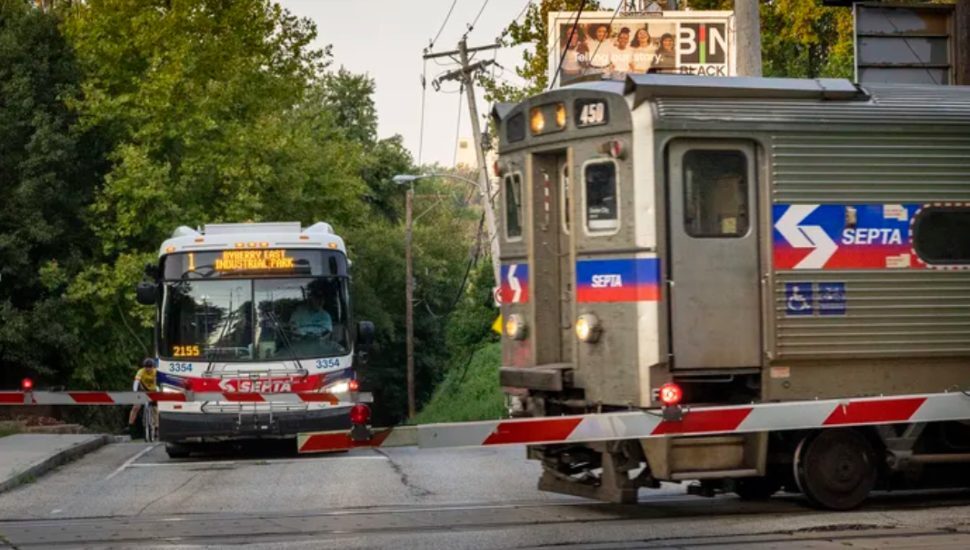 Image via Alejandro A. Alvarez at The Philadelphia Inquirer.
SEPTA will use a federal grant to boost the safety of rail/roadway intersections.

A $15 million federal grant is funding a SEPTA initiative to increase traffic safety at 22 Regional Rail lines crossings. Thomas Fitzgerald tracked down the story details for The Philadelphia Inquirer.

The grant is funded through a Federal Highway Administration program that assists transit authorities with safety measures at grade crossings.

Locally, the need to lessen the dangers inherent in the intersection of railroad tracks and roadways is an ongoing concern. From 2016 through 2021, six incidents at SEPTA stations experienced crashes that caused the death of one person and injured five.

Typically, grade crossings on Regional Rail feature warning lights and two automated gates that block passage when a train crosses. They also use white lines that indicate where motorists need to stop.

SEPTA plans to use the grant funds to install four gates at 11 of its crossings to prevent drivers from navigating cars around the barriers to cross ahead of moving trains.

Another 11 crossings will get high-visibility yellow pavement markings, along with reflector posts. A yellow diamond pattern bracketing the tracks will also be added. Nine crossings will receive both.

The crossings in Bucks, Montgomery, and Delaware counties are among those set for improvements. The crossings intersect with the Lansdale/Doylestown, Manayunk/Norristown, Media/Elwyn, Warminster, and West Trenton lines.

Read more about SEPTA in The Philadelphia Inquirer.