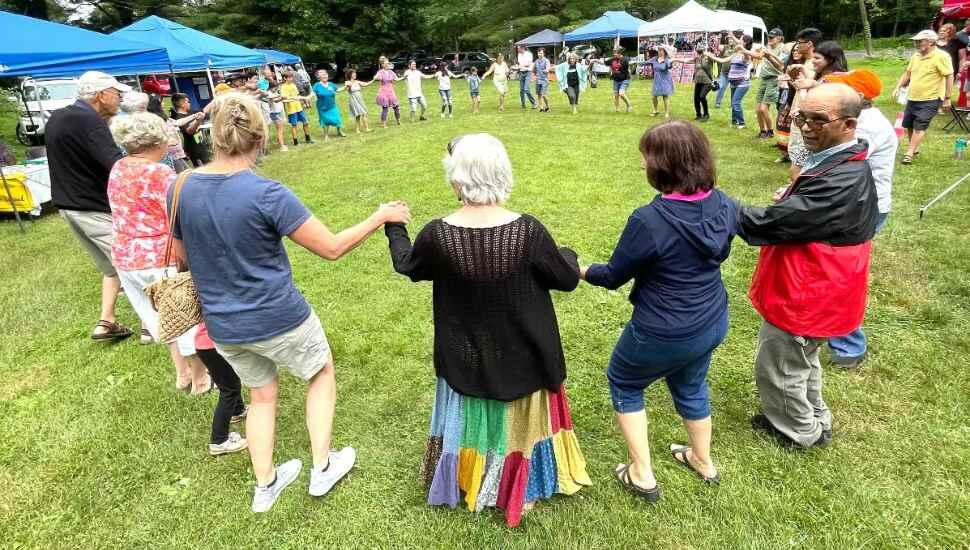 Image via Jeff Werner at the Doylestown Patch.
The First People’s Festival in Doylestown concluded with a unifying "Round Dance."

The First People’s Festival in Doylestown got off to a solemn start. But it didn’t take long for the fun to take over. Jeff Werner drummed up the details in the Doylestown Patch.

The festival’s organizer was Arrows 4 Native Americans, a Yardley outreach that committed to protects, preserves, promotes, and provides for indigenous peoples.

The program at Pebble Hill Church opened with Chief Gentlemoon Chuck DeMund paying homage to the north, the south, the east, the west, the sun, the stars, and the moon.

That solemn beginning gave way to a day of craft demonstrations, powwow songs and chants, and food that ranged from tacos to hot dogs.

Younger attendees got some insight into the skill to supply food through hunting.

Barbara “Bluejay” Michalski of Penndel had kids trying to throw corncobs through hula hoops that she rolled by. The coordination was supposed to show them the difficulty of hitting a running deer (the hula hoops) with an arrow (the corncobs).

“Traditionally the boys were the hunters, so they taught them games so they could develop their hand and eye coordination,” explained Bluejay. “It’s nice to have events like this so that we can share our culture with others,” she concluded.

A sock-and-shoe collection was also part of the day, which ended with a unifying “Round Dance.”

More on the First People’s Festival is at the Doylestown Patch.