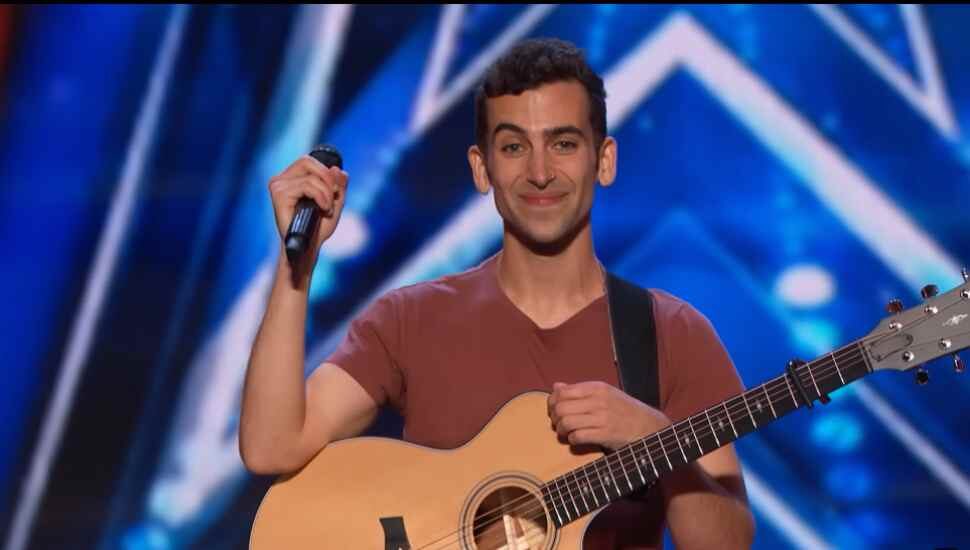 Ben Lapudis, a 29-year-old singer-songwriter from Doylestown, took the America’s Got Talent stage Tuesday night for his big shot at stardom.

He accompanied himself on the guitar, performing a self-penned piece called “Parmesan Song.” The work is an ode to Lapudis’ apparent longstanding frustration with waiters at Italian restaurants who usurp the task of sprinkling cheese on pasta dishes.

The song had no true melodic arc. Its lyrics were engaging in a satirical way (“Why are they so stingy? Is there a shortage of Parmesan?”). And Lapudis’ guitar skills were adequate.

The judges — Howie Mandel, Heidi Klum, Sophia Vergara, and Simon Cowell — lost interest rather quickly. Lapudis was barely a quarter through his magnum opus when he received three Xs, just one vote away from being immediately ushered off the stage.

Klum, however, hung in.

And the audience began to warm to the performance.

As Lapudis continued — now bellowing his lyrics — the crowd had caught onto the so-bad-it’s-good vibe was on its feet in support.

Eventually, however, even Klum found the presentation too cheesy.

But the audience continued to roar its support, giving the Bucks County performer a standing ovation.

As a prolonged wave of appreciation for the “Parmesan Song” swept the theater, Cowell caved, withdrawing his X.

Mandel remained firm in his No vote. Klum then also switched to a Yes.

Vergara, who seemed confused throughout, changed her mind and sided with Klum and Cowell. She seemed to regret it almost instantly, saying, “It was a horrific song, and now we’re gonna have to hear this guy again,” she said.

But by then, Ben Lapudis had advanced, sending the AGT crowd into a joyous frenzy.