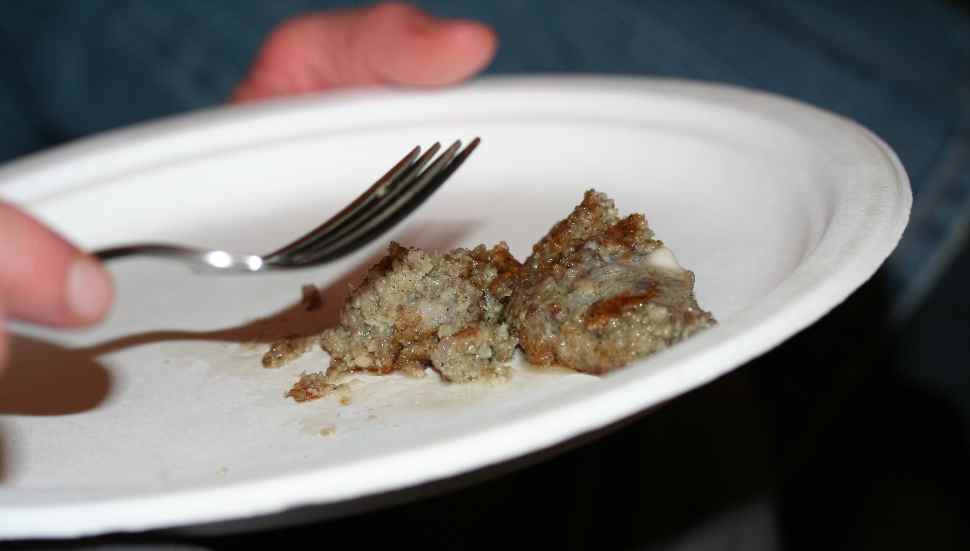 Image via Aaron Patterson at Creative Commons.
Scrapple, a culinary gift from the Pennsylvania Dutch, remains a popular dish across the Phila. region.

Try going into a favorite diner for breakfast across the Phila. region and ordering eggs, home fries, coffee, and pannhass and prepare for a puzzled server’s response. But refer to scrapple instead of the side’s Pennsylvania Dutch name, and a crispy square of spicy meat will complete the first meal of the day. A staff report in Philly Bite Magazine traced this uniquely Philly-area breakfast staple.

Scrapple came from the medieval practice of cooking up a reserved piece of pig’s meat to create yet another meal. The English version — black pudding — spread in popularity to mainland Europe where the Dutch added it to their diets.

When those settlers came to America and settled in what became mid-state Pennsylvania (the Pennsylvania Dutch), they brought it with them.

They revised the recipe from one pork leftover to several. The recipe evolved into a process of boiling scraps and bones; simmering the result with cornmeal, wheat flour, spices, and onions; and cooking the mush until it could be pressed into a loaf.

From there, it was sliced, heated, and eaten.

The use of scraps led to a new name: scrapple.

Today, scrapple is still a local favorite. The way it is made remains very similar to the original recipe but many variations have developed over time. Some current recipes include eggs, milk, and vegetables.

The dish has also evolved from being primarily a breakfast accompaniment to become a unique lunch (in a sandwich) or even a dinner entrée.

BUCKSCO Escape: Washington's Troops Went Hungry, But That Doesn't Mean You Have To! 41 Places to Eat When Visiting Valley Forge National Historical Park

Bellinis for Everybody! Local Inn's Brunch Rated One of the Best in the U.S.