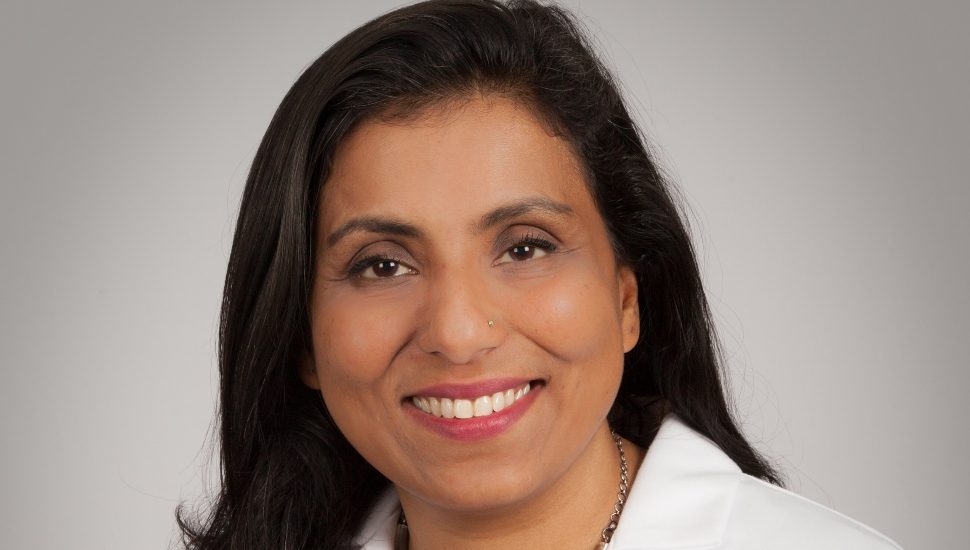 Dr. Shafinaz Akhter and her colleagues at Chester County Hospital have been battling COVID-19 cases since the very beginning of the pandemic.

Over that course of time, her education and her experience have shaped a definite view of the disease, its progress in Chester County and beyond, its treatment options, and heaviest on her heart, its toll.

The proliferation of the Delta variant — especially after progress was made region-wide before its emergence — has been particularly disheartening.

However, the up-and-down rollercoaster of fighting a biological enemy is nothing new to Dr. Akhter.

Mutations in SARS CoV-2 (the virus that causes COVID-19) were in the deck of cards from before they were even dealt.

It’s the nature of a virus, Dr. Akhter says, to shift, morph, adapt, and in a Jurassic Park manner, “find a way” to survive, despite efforts to eradicate it.

“All viruses mutate all the time,” she explains.

They do so because they lack the higher-level backup mechanisms to ensure future versions of themselves are faithful copies of their parents.

Those genetic protectants — called fidelity mechanisms — aren’t as robust among viruses as they are in humans, for example.

The original SARS CoV-2 virus, which Dr. Akhter calls the “ancestral strain,” broke out in late 2019, early 2020, according to most reports. By that summer, it had already replaced itself with another dominant strain.

Eventually, the World Health Organization began labeling variants of concern, starting with the UK variant, Alpha. As each generation followed, slightly different from its predecessor, the nomenclature likewise marched through the Greek alphabet: Beta, Gamma, and now Delta.

The Importance of Vaccinations

The Delta variant likely won’t be the last, either, which is why the COVID-19 vaccine is so highly recommended by healthcare professionals and organizations worldwide. Mutation of the virus increases with each new host (new cases). When the virus comes in contact with a vaccinated person, it has a lower risk of infecting that person, inhibiting it from further spread and mutation.

The ongoing efficacy of the COVID-19 vaccine remains Dr. Akhter’s prime reason for endorsing it.

Despite this, Dr. Akhter has encountered a lot of vaccine resistance since its EUA release.

“I had a discussion with a colleague about those who choose to not get vaccinated,” she related. Pushback on the vaccine recommendation is not uncommon, with many characterizing it as “taking choice away” from them.

Dr. Akhter is quick to respond to those concerns by focusing on the collective and sharing that the choice to not get vaccinated is hindering our efforts to fight a disease that can “bring humanity to its knees.”

Calling on the public to consider the greater good is a tactic Dr. Akhter has employed numerous times over the past months to counter vaccine reluctance.

“Don’t get vaccinated for yourself,” she outlined. “Get it for all of us. Get it for the most immunocompromised of us, for our kids.”

Some members of the public fear COVID-19 vaccines because of the speed with which they were produced.

That skepticism, Dr. Akhter asserts, is misplaced. She goes on to explain that mRNA technology has been in development for many years before COVID-19 was used as its main target.

“What surprised people like me was not the technology. It was that in the clinical trials, it worked so well.

“The spike protein was very immunogenic, and it worked really well.”

Dr. Akhter is also the mother of three. Two of her daughters are above the age 12 threshold for a COVID-19 vaccination and have gotten their shots.

Vaccines for children under 12 are on their way, she says.

“It will be children ages 5-11 first,” she says, “then children six months to five years.”

There is a lot of talk right now about how to further protect the immunocompromised in light of the Delta variant, and whether or not vaccinated individuals will need booster shots.

Dr. Akhter was quick to distinguish between third-round dosages and boosters.

Third-round dosages are currently being provided to the immunocompromised population. These individuals are at a higher risk of contracting the virus because they have a weakened ability to form an immune response. They are also more likely to have a severe infection due to their weakened immune systems. The third shot — currently recommended for those who received an mRNA vaccine (Pfizer or Moderna) — provides additional fortification of the first two doses.

A booster, she explains, is for those who got the vaccine more than six months ago and is intended to “augment the initial adequate immune response.”

She expects boosters to get more traction after industry discussions this month.

She also believes that most of us will be recommended to get one. So, keep that vaccination card handy and get ready to roll a sleeve one more time in the ongoing fight against COVID-19.

In addition to getting vaccinated, Dr. Akhter still recommends caution when interacting with others. She’s very clear in delineating where COVID-19 infections happen, and where they don’t.

“You’re not going to contract the virus by passing someone in the grocery store or by touching a surface or a grocery bag,” she explains.

“You’re going to contract it by sitting inside with someone, talking face to face for 15 minutes.”

Dr. Akhter believes there is a “serious disconnect among human beings that if you’re not sick you’re not contagious.

“That is not true at all for COVID,” she states emphatically.

Tracking the spread of COVID-19 from individual to individual isn’t as tough as some patients want to believe. It’s just a matter of remembering — or more accurately, admitting — who you spent time with over the week or so prior to infection, regardless of whether or not they were symptomatic.

Understandably, that can be a realization people aren’t eager to make, especially when it comes to friends and family.

“I went through this with a patient day by day,” Dr. Akhter recalls. “Every day she said there was nothing. No contact.

“But eventually, she told me ‘Oh! Well, I did go to a wedding on Friday…’

“It took her literally 20 minutes to admit that to me.

“People don’t want to go there. It’s emotional to admit that they did something that put themselves at risk. Even though it’s human and you shouldn’t feel responsible and bad about it.”

Dr. Akhter is confident in the power of vaccinations to beat COVID-19 once and for all. So much so that she offers a stark warning to those who choose to skip their shots.

“Every unvaccinated American – 100 percent of them – will get COVID. I have zero doubt,” she predicts.

When asked how the past months have affected her personally, Dr. Akhter turns pensive.

“When I see very sick, unvaccinated people come to the hospital with the virus, I can’t help but think, this didn’t have to happen.”

As she and her colleagues continue to fight the SARS CoV-2 virus, she reminds the public not to underestimate the power of a small kindness: the unexpected purchase of a coffee in a convenience store to a customer in scrubs; the offer of a carpool ride home from school for the child of a physician working long hours; the drop off of a neighbor-to-neighbor meal.

“Reach out a hand” Dr. Akhter recommends. “Offer to help. Even when we may not ask for it.

“Because most of us are really suffering here with this.