Traveling the Country in a Refurbished Bus, Unionville Grad Takes Work-from-Home Concept to the Next Level 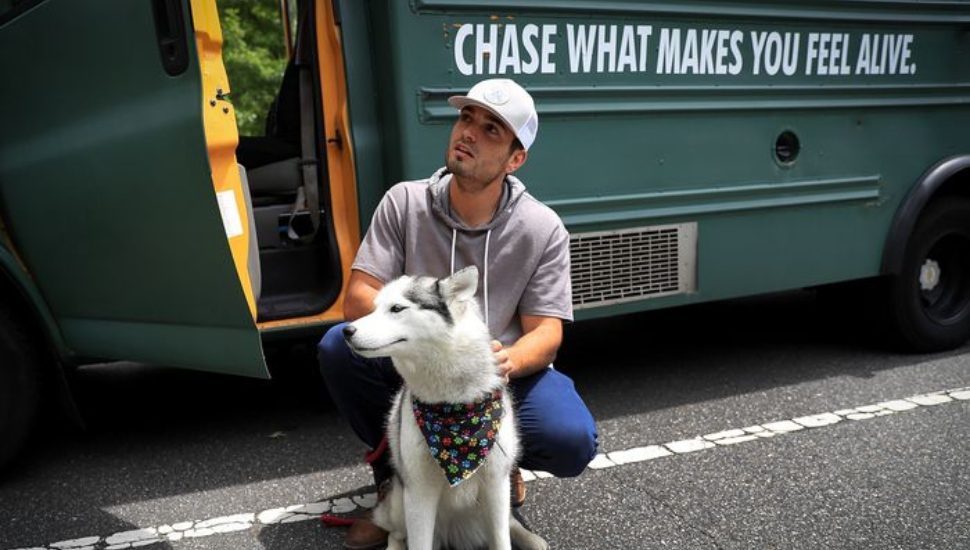 Chadds Ford native Michael Burlotos, a Unionville High School and West Chester University graduate, redefined the work-from-home concept during the pandemic. He stayed away from his office. But he didn’t exactly shelter in place, either, reports Jason Nark for The Philadelphia Inquirer.

Burlotos spent the pandemic lockdown traveling the country in a refurbished school bus. He worked his job on the road.

Burlotos moved to Atlanta in March 2020 for a new job position. He was excited about getting to know the city and meeting new people.

But then COVID-19 put a damper on all of that.

“I was trapped in this apartment with no friends or family around,” recalled Burlotos.

Thanks to an accommodating, work-from-home policy at his new company, he was able to do something about it. While keeping his financial technology job, the 25-year-old packed up and headed west — initially in his car, later in roomier transport — with his dog.

“I felt this whole new rush of life,” he said. “I was jumping into 50-degree lakes, doing things I’ve never imagined myself doing.”

In November, he bought a 2003 refurbished Chevy bus and joined #vanlife with room for his bed, sink, and toilet. He has already visited 30 states and plans to continue going.

“The best part about all of this has been all the people I’ve met,” he said.

Read more about Michael Burlotos in The Philadelphia Inquirer.

Fantasizing About Traveling … and Much More