In the Garden With Andrew: Great Yellow Magnolias 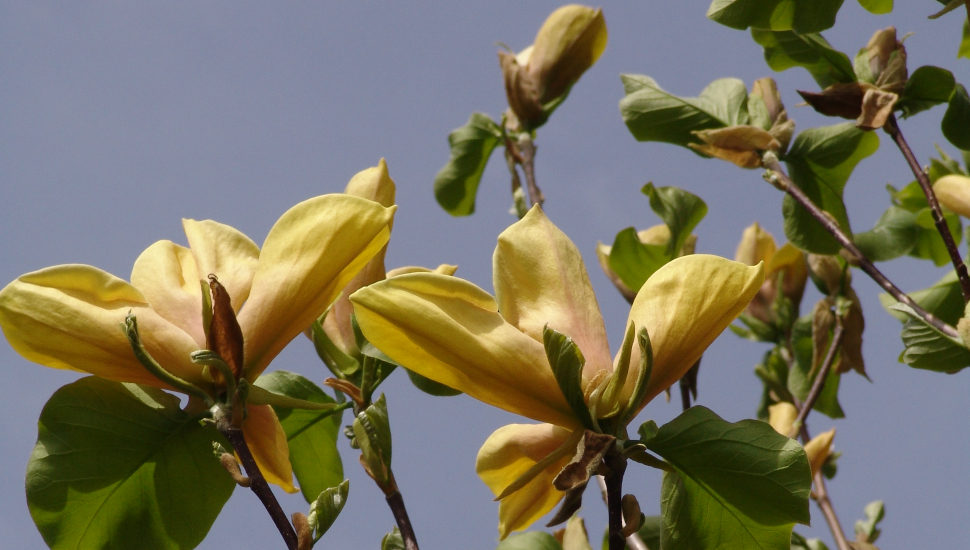 In the magnolia world of the 1970s, creating a yellow magnolia was considered the holy grail. The cucumber tree magnolia, Magnolia acuminata, has slightly yellowish flowers, and people theorized that — if the right second parent could be identified — a yellow-flowering hybrid could be produced.

The Brooklyn Botanic Garden’s breeding program went to work on the project. Eventually, by crossing Magnolia acuminata with the Yulan magnolia, Magnolia denudata, they created ‘Elizabeth’, the first yellow magnolia ever released.

Today, there are probably three to four dozen selections of yellow magnolias, but ‘Elizabeth’ remains one of the best. Its slightly fragrant, upward-facing flowers are soft and sulfur yellow.  Most yellows bloom toward the end of April — or even in early May — minimizing the risk that the flowers will be singed by frost.

‘Elizabeth’ blooms just before its leaves emerge. Its cucumber tree parent can grow to over 100 feet, and ‘Elizabeth’ can reach close to 50 feet. While all magnolias are grown for their exceptional spring flowers, most magnolias, including ‘Elizabeth’, also have exceptional gold-yellow foliage in the fall.

‘Butterflies’, hybridized by Phil Savage in Ohio, is one of the earliest-flowering yellows. Its profusion of tepals (modified petals) create an amazing floral effect. Like ‘Elizabeth’, this fast-growing tree reaches a significant height. It is also one of the hardiest of the yellow magnolias.

‘Lois’ — another product of the Brooklyn Botanic Garden’s breeding program — is on my top-10 list of magnolias. In its first 15 years of growth, ‘Lois’ is stout and somewhat compact. Its amazingly abundant tulip- or chalice-shaped flowers are a rich butter-yellow. Over time, ‘Lois’ will reach 30 feet. It is one of the better yellow magnolias for smaller gardens.

Philippe de Spoelberch hybridized ‘Daphne’, with its bright, clear-yellow flowers, at Arboretum Wespelaar in Belgium. At maturity, ‘Daphne’ reaches only 12 feet, with a spread of 5 to 7 feet, making it a nicely compact plant for small, residential gardens.

‘Yellow Lantern’ is a hardy cultivar with large goblet-shaped flowers. It has an upright habit, and reaches 20 feet at maturity. It also has an interesting parentage, being a hybrid between Magnolia acuminata var. subcordata ‘Miss Honeybee’ (another yellow magnolia) and the pink saucer magnolia, Magnolia x soulangeana ‘Alexandrina’. While the somewhat fragrant flowers are largely yellow, the base of the tepals are suffused with a soft blush pink.

Other cultivars to consider include Magnolia acuminata, the cucumber magnolia, which is the parent of most of the yellows. You would not grow this tree for its flowers: The bluish tepals shroud most of the small blossoms’ color, and flowering tends to occur after the leaves have come out. It is, however, a true native, found in woodlands from Canada to as far south as Florida, and as far west as Arkansas and Louisiana. It gets its name from its fruit, which looks like small cucumbers. This towering tree can reach 100 feet in height, with a spread of up to 75 feet. Like many yellow magnolias, it has stunning golden fall color.

Finally, one of the most interesting yellows is ‘Judy Zuk’, the most recent magnolia to be released from the Brooklyn Botanic Garden’s yellow magnolia breeding program. It is a complex hybrid whose ancestors include M. acuminata, M. liliiflora, and M. stellata. The result is an upright tree whose tulip-shaped flowers are a mix of orange and yellow, with a flush of pink. Their fruity fragrance is unforgettable.

This article first appeared in The Swarthmorean. Andrew Bunting is the Vice President of Public Horticulture for the Pennsylvania Horticultural Society (PHSOnline.org) which uses horticulture to advance the health and well-being of the Greater Philadelphia region. Andrew has decades of horticultural experience, ranging from his tenures at public gardens in the U. S. and abroad, as well as a published author, gardening expert, and sought-after presenter.

To learn more about PHS or to become a member and support greening initiatives in over 250 neighborhoods, visit PHSonline.org.

In the Garden with Andrew: The Majestic Pine

In the Garden with Andrew: The Paperbark Maple Has Perfect Winter Appeal

Andrew in the Garden: Beyond Rhododendrons: Great Broadleaved Evergreens for the Garden