In the Garden with Andrew: The Majestic Pine 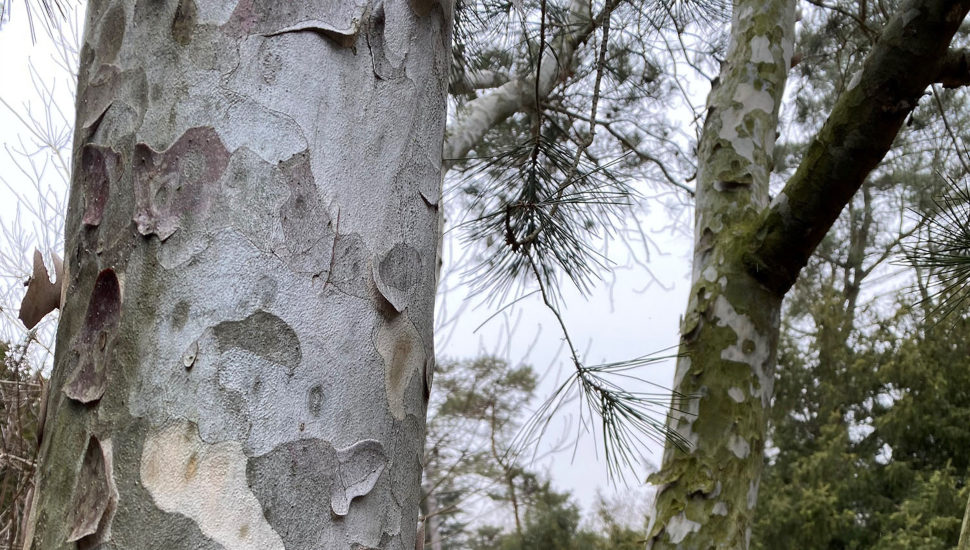 Image by Andrew Bunting
Pinus bungeana, the lacebark pine, at the Taylor Memorial Arboretum in Wallingford.

There is no more widely planted conifer in the Delaware Valley than the white pine, Pinus strobus. A popular conifer as communities were being developed over the last hundred years, white pines are dotted across the landscape throughout the region.

The white pine is native throughout the northeastern states and the Upper Midwest, as well as along the Appalachian Mountains south to Georgia. In my opinion, there is no tree more majestic and iconically northeastern than the white pine.

My neighbors have a towering white pine that was probably planted 75 years ago. It is nearly 100 feet tall and provides a stunning architectural backdrop to my garden. By nature, white pines are brittle and vulnerable to strong winds and, especially, to wet, heavy snows. These can smash branches to the ground, leaving the pines twisted, distorted, and amazingly picturesque.

From infancy to maturity, this soft-needled pine, with five needles per cluster, provides a delicate yet masculine statement in the garden. For its first several decades, it is upright and pyramidal. After losing branches, it takes on a weathered appearance, with flat-topped tiers.

A myriad of pines grow well in the Delaware Valley. Although the white pine is arguably the most common, dozens of pine species — and many interesting cultivars and selections — offer winter interest in the home garden.

The Austrian pine, Pinus nigra, has been planted frequently in recent decades. It is common as a commercial planting at malls and other businesses. With its strikingly beautiful furrowed, alabaster bark, this pine can be strikingly picturesque. But it can also suffer from tip blight,or Diplodea, which can take a toll on its health and ultimately kill it.

Just last weekend, I visited Wallingford’s Taylor Memorial Arboretum, now part of Widener University, for the first time a long time. Right at the entrance is a stunning specimen of the lacebark pine, Pinus bungeana. This pine is native to northwestern China but performs exceedingly well around here. It can be either single- or multi-trunked in infancy, and its mottled bark is pink, white, and army-green.

As the tree matures, the pink fades, leaving white and green. Eventually, the green fades too. Several years ago, traveling in Korea, I saw a specimen that was several hundred years old, and its bark was nearly pure white.

Another pine that performs very well in our part of Pennsylvania is the limber pine, Pinus flexilis, which is native to the western U. S. With long, relatively soft needles, it is similar to eastern white pine, Pinus strobus. One selection, ‘Vanderwolf’s Pyramid’, reaches 20-30 feet in height with an equal spread. With blue-green needles, it is a beautiful and robust specimen that does not require much space in the garden.

The U. S. is home to several other native pines as well. In the South, the loblolly pine, Pinus taeda, is ubiquitous. The loblolly has a coarse texture. In its youth, this single-trunked pine grows fast and erect like a bean pole, later developing a broad, spreading canopy. Though rare in the north, there are a few reasonably sized specimens dotted throughout the local region.

The longleaf pine, Pinus palustris, is probably even rarer, but can be cultivated if given a bit of winter protection. Just across the Delaware River, in New Jersey’s Pine Barrens, you can find two more natives: pitch pine, Pinus rigida, and the Virginia pine, Pinus virginiana. Both of these heat- and drought-tolerant species are shorter in stature than most pines and have a more rugged architectural appearance. Both are good options for local native habitats and plantings.

Andrew Bunting is the Vice President of Public Horticulture for the Pennsylvania Horticultural Society (PHSOnline.org) which uses horticulture to advance the health and well-being of the Greater Philadelphia region. Andrew, who lives in Swarthmore, has decades of horticultural experience, ranging from his tenures at public gardens in the U. S. and abroad, as well as a published author, gardening expert, and sought-after presenter.

To learn more about PHS or to become a member and support greening initiatives in over 250 neighborhoods, visit PHSonline.org.

When Phoenixville Couple Left Free Flowers on Their Front Porch, They Didn’t Expect Such Poppy-ular Results

Co-Owner of Blue Moon Acres, Buckingham ‘Always Liked the Idea of Growing What We Eat’

Dazzling Garden in Norristown is Product of Love, Dedication