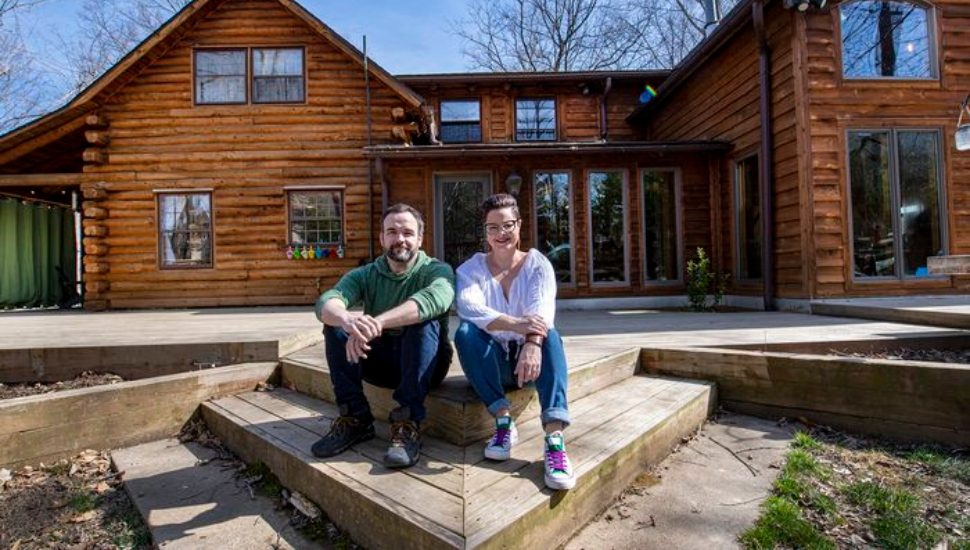 A former Chalfont log cabin, hand-built in 1979, was eventually forgotten and abandoned. Taura and Matt Kilroy, a couple disenchanted with the modern properties, bought it recently. They’ve now transformed it into a timbered showpiece, writes Laura Beitman Hoover for The Philadelphia Inquirer.

The birth of a second child and a long work commute nudged the Kilroys to house-hunt in Bucks County.

Nothing struck their fancy until they happened on a truly unusual property: a four-bedroom, 2,500-square-foot cabin that repeatedly popped up in their searches.

Taura, a do-it-yourselfer, jumped at the chance. Matt, equally as eager, fell in love with the “earthiness of the logs.”

Upgrading the spartan interior was a long process. Some jobs the couple tackled themselves; others they contracted out.

A large addition increased the living space. The new great room has 30-foot ceilings and three stories of windows.

The Kilroys retained some of the original appointments. A row of antique nails over a stone fireplace now holds an array of cast-iron pans.

“This is not for everyone,” said Taura, commenting on her home’s old/new vibe. “I have never owned a log cabin before. I’m learning how to care for one. But we love it.”

Further details on the cabin’s transformation are at The Philadelphia Inquirer.