KOP Hospitality Hiring Fair to be Held May 4 at the Alloy; Applicants May be Eligible for a Bonus 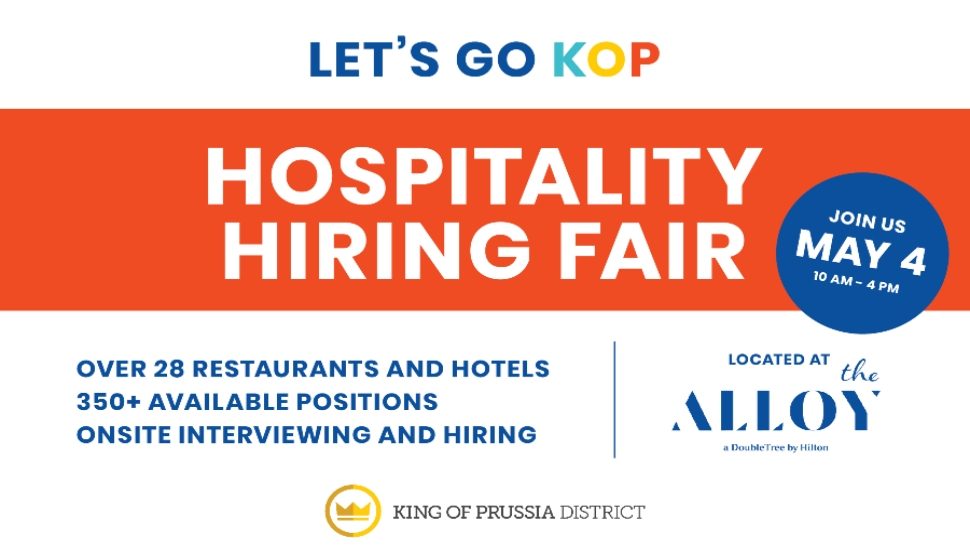 While this influx of business is much needed after an extremely difficult year, it highlights a new problem that is plaguing the hospitality sector across the country: A staffing shortage.

Many of KOP’s best restaurants and hotels are participating in the Let’s Go KOP Hospitality Hiring Fair and will interview and hire for 350+ positions with a variety of experience levels.

King of Prussia District is also sponsoring a bonus program, offering $20,000 in bonuses during the event.

The first 65 people to accept a position with a participating business will be eligible for a $300 bonus!

King of Prussia District will also provide free shuttles to and from the Norristown Transportation Center, running 9:45 AM – 4:15 PM every 30 minutes.

Why Work in King of Prussia

“King of Prussia’s hospitality scene is booming, attracting people from near and far who are drawn to our world-class dining, shopping and entertainment,” said Eric Goldstein, Executive Director of King of Prussia District.

“Coming off a difficult year, it’s difficult for us to hear that our hotels and restaurants are struggling to staff up for the increased business. We hope that by highlighting the many reasons why KOP is a great place to work and offering an extra incentive with the bonus, we can encourage people to start the next chapter in their employment journey in King of Prussia,” he explains.

With incredible amenities, including world-class fitness facilities, a diverse dining scene, convenient shopping, a variety of outdoor recreation, beautiful new housing options, and easy access from just about anywhere in the Philadelphia region, KOP is a prime location for employment.

Interested applicants should bring copies of their resume and can also access many of the applications in advance on the Hiring Fair’s webpage. Join us for the Let’s Go KOP Hospitality Hiring Fair and start your new chapter in King of Prussia!

For more information, including a list of open positions, visit here.

Today's Wawa’s Hoagie Day Gets to the Meat of July 4 Honorifics: Saluting the Military