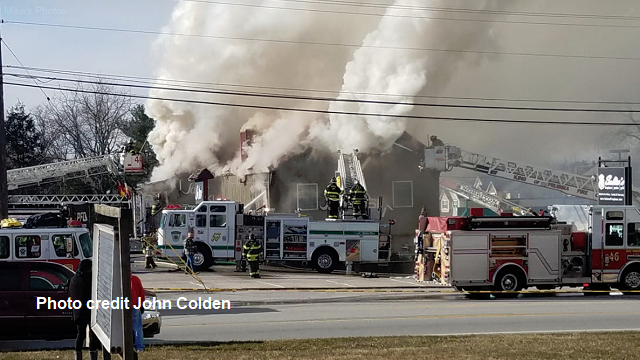 The efforts of the firefighters contained the blaze to the Salter’s building and prevented it from spreading to the remainder of the Colonial Shopping Center. (Image courtesy John Colden)

Lower Providence police, fire and EMS were dispatched, and the initial fire was observed at the rear of the building. Dispatchers upgraded the call to a working building fire which brought resources from Montgomery, Chester, Berks and Bucks counties, according to a press release from Lower Providence Township.

A command decision was made to take a defensive position with exterior firefighting only, to include the protection of the neighboring buildings. To assist with firefighting, Horgan Brothers of Harleysville provided heavy equipment to excavate the building.

To ensure there would not be a shortage of water, a water supply task force, include large diameter hose and tankers, was activated. PA American Water Company worked with command to manage the public water resource. When water demand became critical, a decision was made to truck water in from another system in Collegeville Borough.

The fire was deemed under control at 2:30 p.m. There were no injuries.

The efforts of the firefighters contained the blaze to the Salter’s building and prevented it from spreading to the remainder of the Colonial Shopping Center. Lower Providence administration and Public Works worked through the evening to have utilities restored to the other businesses, which include AMG Beauty Bar, Kriebel’s Bakery, Biryani City Restaurant, Cosmetic Family Dentistry, Redeemer Church Office, Fairy Tails Dog Grooming Salon, Nook & Kranny 2 Kafe, and Main Street Pizzeria. The businesses were then able to open as of Sunday after approval of the county health department.

ServePro of Norristown and the Township Public Works Department worked together to secure the property. Public Works and PennDOT salted the roadway during and after the event.

For information on alternate storefronts for Salter’s Ski Shop and Salter’s Fireplace, Patio and Grill please monitor their website.

Due to the prolonged nature of the event, North Penn Goodwill canteen service of Souderton, provided on-site food and drink for the emergency responders and Oehlert Bros. Inc. of Royersford provided emergency diesel fuel for the 40 plus apparatus used to fight the blaze.

The fire is being investigated by the Lower Providence Township Fire Marshals with assistance from the Lower Providence Township Police and Fire Department and the insurance agencies involved to determine an origin and cause. Anyone with critical information or photos that they can share with the fire marshal, Charles DeFrangesco, can contact him at firemarshal@lowerprovidence.org.