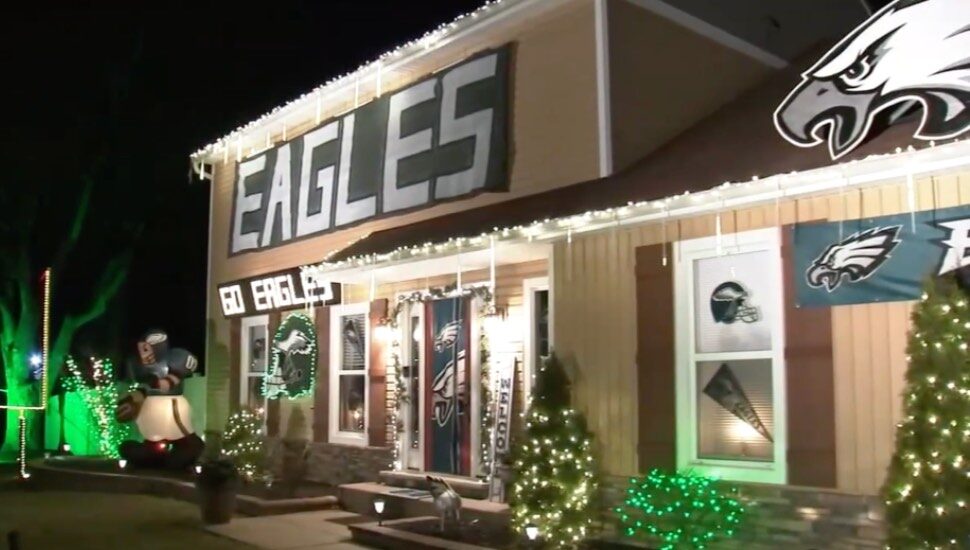 Image via ABC6
The local fan has turned his home into an Eagles shrine for all to see.

A Bucks County man is showing his love for the Philadelphia Eagles by decorating his house with the symbols and colors of the team. Bryanna Gallagher wrote about the local home for 6ABC.

Larry Glowacki, a die-hard Eagles fan, decorated his entire house from head to toe to celebrate the Birds’ playoff run. “It’s the love of the team, the team is great,” said Glowacki. “Sometimes it’s up and down, but we love our Eagles.”

Glowacki has been decorating his Langhorne home in the colors and signs of the birds for nearly 18 years, and each year the decorations get bigger and bigger.

“It’s just the fact of supporting the Birds,” said Glowacki.

His Eagles setup has also become a welcome sight in his neighborhood.

“Neighbors are begging me around Halloween asking, ‘where’s the Eagles decorations?'” he said.

He does the entire setup himself, even though it does take a lot of time.

“We’ve watched him in the kitchen… painting, cutting in the garage,” said his daughter Alyssa.

For example he had to drill 1,100 holes just for the big Eagles LED sign seen outside of his house. Once he was done, he then put the sign up himself.

If the team makes it to the Super Bowl, the party and the setup will become even more spectacular.