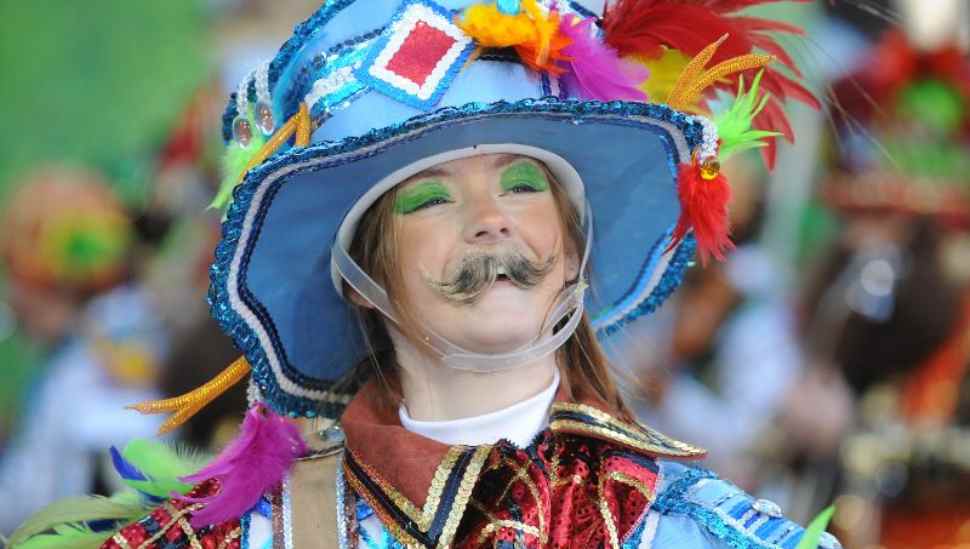 The fact that both New Year and Ash Wednesday 2022 were long in the rear-view mirror didn’t dim Neshaminy Manor’s Mardi Gras party with the Uptown String Band. All Around Bucks County covered the afternoon of strutting and music.

The Langhorne mummers’ appearance — a surprise to residence’s seniors — came about from the Twilight Wish Foundation, a Jamison nonprofit whose sole mission is simply to make seniors happy.

The residents knew something was brewing when staff bedecked them in Mardi Gras beads. They weren’t sure exactly what was in store until Uptown arrived — members in full-feathered regalia — and filled the space with its signature sound.

The string band’s history dates to the late 1930s. Its 1947 recording of I’m Looking Over a Four-Leafed Clover sold over a million copies.

The Neshaminy Manor audience thoroughly enjoyed the performance, dancing both on their feet and in their chairs.

Since its founding in 2003, Twilight Wish Foundation has granted over 4,500 individual wishes to seniors throughout the U.S.

It works to bolster the spirits of seniors who are 65 and older or permanent residents of a nursing home and whose earnings are less than 200 percent of the poverty level.

More on this story can be found strutting around the website of All Around Bucks County.

Advanced Dental Esthetics, Chalfont, Takes the Bite Out of the Stigma of a Smile That’s Absent a Tooth

High Temps Require Seniors to Take Care, but in Ways That Go Beyond Shorts, Shade, and Cool Drinks