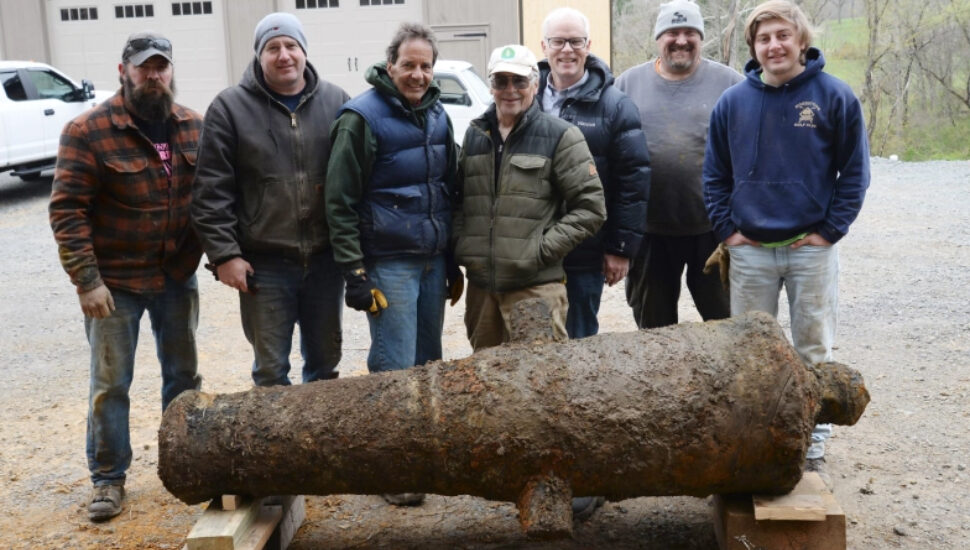 Image via the Daily Local News.

Four massive Revolutionary War-era cannons that were cast at historic Warwick Furnace have been unearthed by the French & Pickering Creeks Conservation Trust from the Thomas P. Bentley Nature Preserve. This Chester County find was reported in the Daily Local News.

“During the 1777 British advance on Philadelphia, cannons cast at Warwick were buried in the fields next to French Creek to keep them from falling into British hands,” said historian and author Daniel Graham.

The cannons were found, thanks to geophysical surveys commissioned by Ray Bentley, a neighbor and supporter of French & Pickering’s Thomas P. Bentley Nature Preserve.

First, magnetic anomalies indicating the presence of large iron objects were detected. Then, a small group performed manual searches at given locations.

Finding the first cannon was a thrilling moment for the group.

“These cannons were cast and buried at a critical time in our country’s history and rested unseen only a couple of feet below the soil for almost two and a half centuries,” said Bentley.

The cannons are over seven feet long and weigh more than 4,500 pounds.

Read more about the historic cannons in the Daily Local News.

New Newtown Borough Park Named for Victims of a Revolutionary War Raid, Not an Eagles Arch-Nemesis