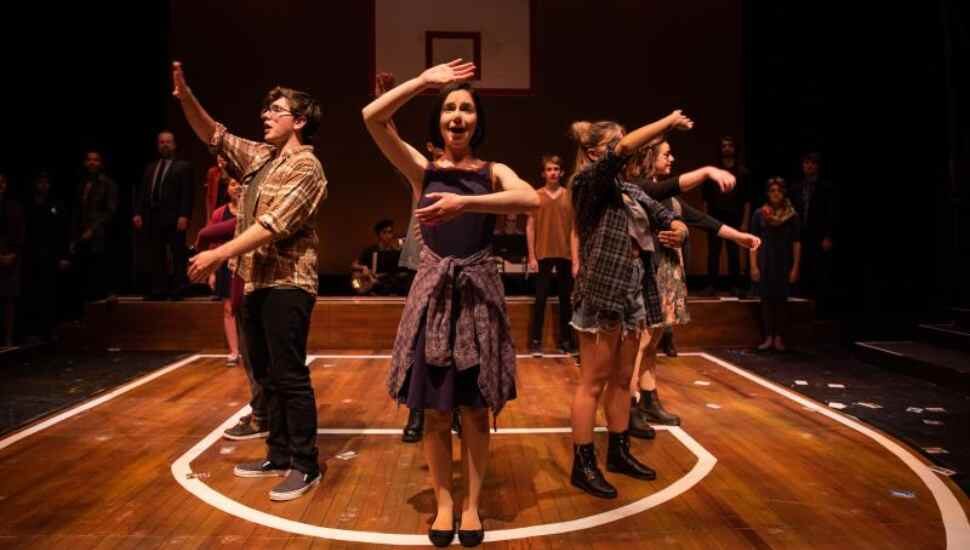 Image via William McKeown at the Drexel Co-op Theatre Company at Drexel University.
The Bucks County Playhouse seeks male actors for a summer production of an unusual musical, ALiEN8.

If you’re an actor 13–18 years old with a certain star quality, the Bucks County Playhouse Youth Company would like to hear from you. The theater is preparing an August 4–6 run of a musical called ALiEN8 and is seeking five actors (male) to fill the roles.

ALiEN8 is called a “musical about being human.”

It takes place in a small Midwestern town. A tornado touches down on prom night, leaving devastation in its wake — and a third of the town gone.

Appearing amidst the rubble is a stranger — who identifies only as 8.

8 communicates through a unique gestural language and begins to acquire English by reading novels like The Catcher in the Rye, Lord of the Flies, and The Grapes of Wrath.

When the students start to learn 8’s language, they threaten to unearth a dark secret that the town’s adults would rather keep buried.

The male roles being cast are:

Auditions will be solely by video; actors should submit themselves singing 16–32 bars of any song and reading for a specific part. The sides for that part of the tryout can be requested by email.

December 18, 2021
Tags: ALiEN8, Bucks County Playhouse, Lord of the Flies, The Catcher in the Rye, The Grapes of Wrath