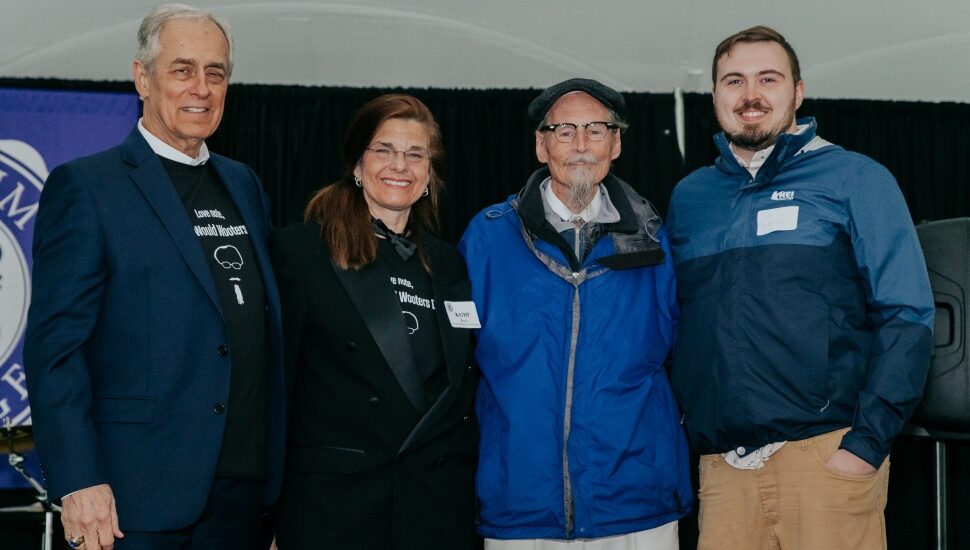 Though Mother Nature tried her best, the spirits of the Class of 2022 could not be dampened during Harcum College’s 106th Annual Commencement. It was the first in-person gathering in three years because of the pandemic, and 300 graduates and 1,200-plus guests assembled on the Great Lawn to celebrate a long-awaited and life-changing milestone presided over by President Jon Jay DeTemple.

The event included a welcome from the Chairman of the Board of Trustees Dr. Alexander Klein, who awarded Early Childhood Education faculty member Christine Carslon with the Philip Klein Award for excellence in teaching. Also, for 37 years of service to the college and its Veterinary Nursing Program, Dr. Craig Wooters received a Doctorate of Humane Letters and delivered an inspired commencement address for graduates.

While graduates crossed the stage when their name was called to receive a diploma from DeTemple, several graduates were surprised with special honors for which they had been nominated by faculty and staff:

Student-athlete Louis Bleechmore, a General Studies major, received the President’s Award. In his citation, DeTemple mentioned that Bleechmore, a leader of the men’s basketball team and a native of Sydney, Australia, was a stellar student with a 3.79 GPA. DeTemple characterized Bleechmore as someone who strives to excel in everything he does, one of the reasons why he has received a full scholarship to attend Saint Joseph’s University next year.

Kadidjah Kallo, a Business Management major, received the Harcum Award from Dean of Student Life Dr. Ed Kovacs. She demonstrated exceptional academic achievement by earning a 3.8 GPA and always strives to be the best she can be inside and outside the classroom. Her nominator said she seized all opportunities and possibilities for academic, career, and life preparation while at Harcum and that she truly enjoyed her Harcum experience while balancing academics with other commitments that included a job, her family, and as a representative with the Student Government Association. She also professionally advocated on behalf of all college students for continued access to financial aid while interacting with state representatives.

Paige Robinson, an Occupational Therapy Assistant major, received the Student Leadership Award, presented by Kovacs. He described her as a hardworking student and also someone who has been successful inside the classroom, at her clinical rotations, and through her involvement in several Harcum student organizations, including the Student Government Association and the Coalition of Occupational Therapy Advocates for Diversity. She eagerly interacted with prospective students and their guests at fall and spring Open Houses, sharing her experiences, insights, and love for Harcum College. She also delivered a thoughtful, reflective, and meaningful commencement address.

A new scholarship for Veterinary Nursing was announced at a special reception honoring a retiring veterinarian for his decades of service: the Dr. Craig Wooters Scholarship.

Dr. Wooters enjoyed teaching and mentoring his 1,000-plus vet nursing students during his time at Harcum. Alumni, faculty, staff, students, family, and friends raised more than $50,000 in gifts and pledges to activate the Dr. Craig Wooters Scholarship. The inaugural Wooters Scholarship was awarded to Christopher Dickson.