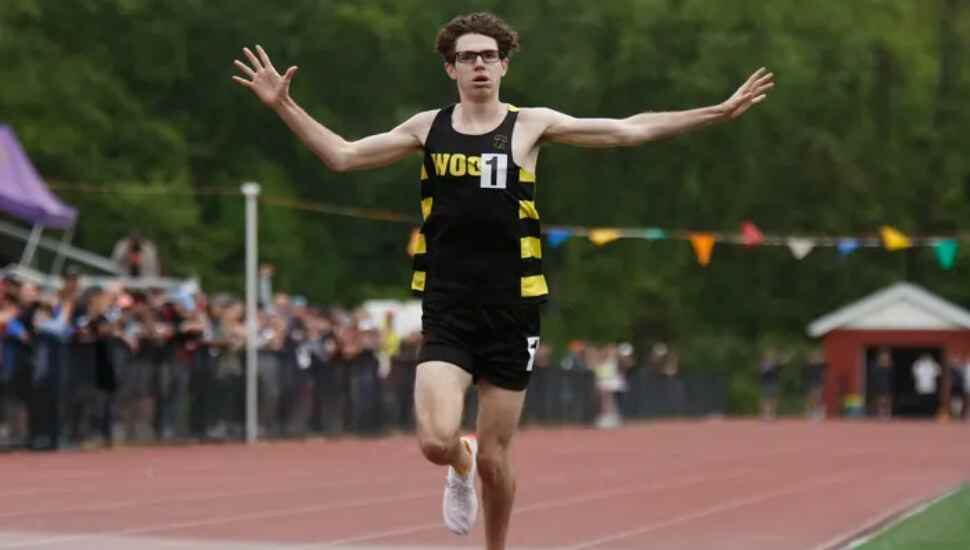 Image via Lou Rabito at The Philadelphia Inquirer.
Runner Gary Martin at the Philadelphia Catholic League Championships, where he set a record speed for a mile run.

The first Pa. high school student ever to break the four-minute mile threshold did so at last weekend’s Phila. Catholic League championships. Gustav Elvin lapped up the good news in The Philadelphia Inquirer.

Senior student Gary Martin had flirted with the Pa. record in the past. But at the regional competition, held at Delaware County’s Cardinal O’Hara High School, he crossed the finish line and stopped the clock at 3:57:98.

It’s not only a statewide accomplishment it’s also a national one. He is now one of only 14 U.S. runners to achieve the distinction. Among country-wide milers logging sub-four-minute times outdoors, the fleet athlete logged the fourth quickest slot. And in the pack of three students who have outrun him, two went onto become future Olympians.

The impact of his track performance began to dawn on him as he completed a cool-down run.

Three years ago, he had never run a mile competitively; his longest competitive distance then was 800 meters, a hair less than a half mile.

By lap three of the race last weekend, however, he had an inkling his performance had the potential to be a standout.

“I was well on pace,” he said. “And I felt pretty good. So, I thought I had another fast lap in me.”

After graduating from Wood, Martin will attend the University of Virginia, where he will also run competitively.

More on record-setting runner Gary Martin is at The Philadelphia Inquirer.