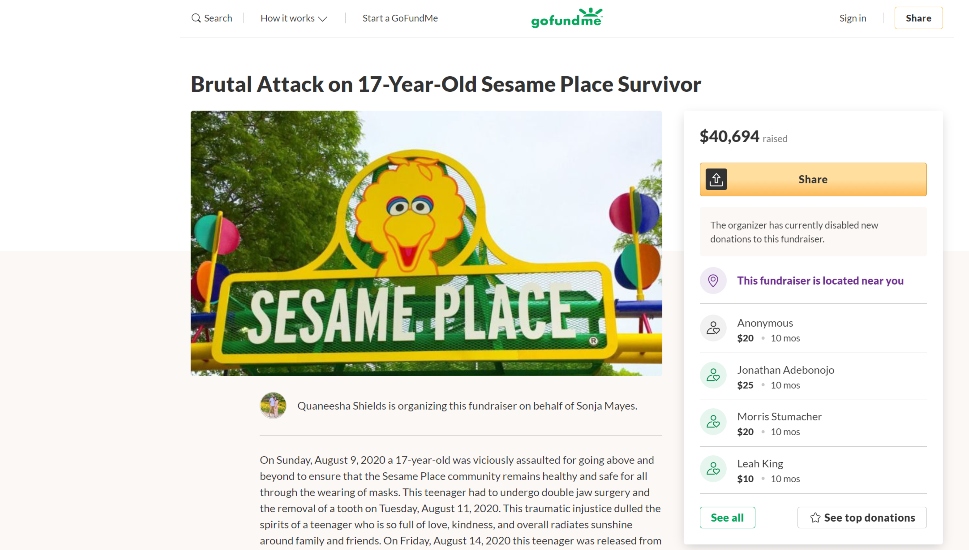 Image via GoFundMe.
The GoFundMe page for the Sesame Place employee injured in an August 2020 attack by a guest. The anonymous 17-year-old also got the benefit of seeing his attackers convicted of assault in Bucks County.

A Sesame Place employee, injured by a pair of guests for upholding a mask policy, has received both justice and support. Kate Fishman, for the Levittown Patch, covered both the recent litigation its philanthropic aftermath.

The August 2020 incident resulted in assault charges — and now conviction — against the perpetrators, Troy McCoy and Shakerra Bonds, both of New York.

The trial stemmed from an August 2020 incident at Sesame Place, Langhorne, when the two attacked a worker trying to enforce the park’s mask mandate.

The employee, 17, had spotted McCoy without a mask. His request to cover up yielded an angry verbal response, from which he walked away.

Later that afternoon, McCoy and Bonds crossed paths again with the employee. McCoy told the teen he was going to “teach him a lesson” regarding the former confrontation.

McCoy and Bond struck the worker until he lost consciousness. A witness described the first blow as a “sucker punch.”

The criminal complaint said that the teen suffered a broken jaw that required a five-day hospital stay and the removal of a permanent tooth.

“You will come back from this, and I dearly hope that your light stays on and your heart open,” read a message on a GoFundMe campaign established to help. To date, the site has accumulated more than $40,000.

The couple was found guilty after a four-day trial; sentencing will be in 90 days.

More on this case is at the Levittown Patch.

Think You Can Fill Big-Bird's Huge Shoes? Sesame Place May Have a Job for You

PREIT Secures Loans With Properties From Its CRE Portfolio, Including Court of Oxford Valley