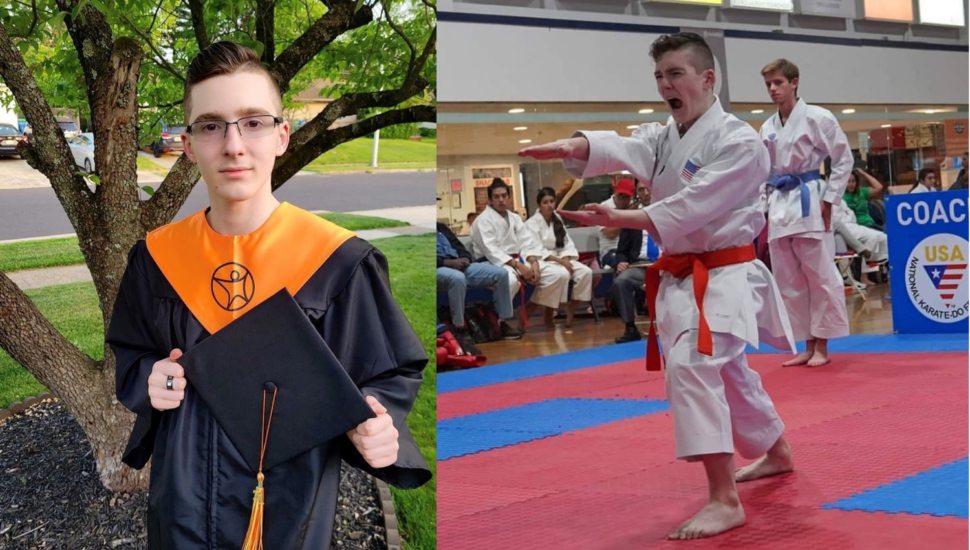 Image via the Rodriguez family.

When he was about 11, Hunter Rodriguez walked out of his sixth-grade classroom and never returned.

He was never marked truant. And the school never reported the absences to his parents. In fact, they knew about the move. And supported it.

Rodriguez formally swapped his traditional education for the online version, withdrawing from one to enroll in the other.

Now he’s graduating from the Reach Cyber Charter School Class of 2021. He earned his diploma a full year earlier than he would have otherwise.

And the pandemic had no effect on his scholastics.

Rodriguez and his parents opted for an online education to better accommodate his participation in competitive karate, a sport he took up at age four.

“I really enjoyed it,” Rodriguez said, referring to martial arts. “I started competing more and more, getting higher and higher in the competitions.”

The online education, according to Hunter’s mother Kelly, became the solution of choice when his traditional educators showed little flexibility in accommodating his ever-shifting schedule.

At Reach Cyber, Rodriguez covered the typical high-school curriculum. Plus, his mom augmented his education with widespread travel, exposures to other cultures and museum trips. The competitive karate circuit had the Rodriguez family visiting Mexico, the Dominican Republic, Argentina, Italy, and (Hunter’s favorite) Cypress.

Rodriguez is heading to Bucks County Community College in the fall to study computer science. He’s planning on an in-person/online mix of classwork, with career possibilities that include design and animation.

Which leaves time for karate.