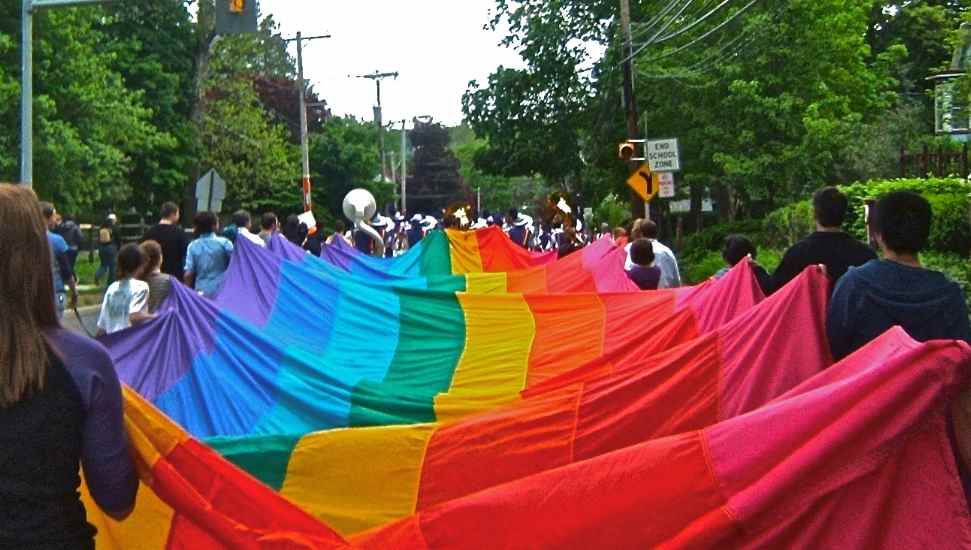 Image via New Hope PA at Facebook.
The New Hope and Lambertville communities are known for their general support of the LGBTQ communities.

Erik Piepenburg, feature editor for The New York Times, wanted an atypical gay getaway this summer. He and his partner and a friend chose New Hope and Lambertville, which he found comfortably quiet and welcoming.

One draw was the convenient commute from Manhattan. Another was a Time Out magazine assessment that noted the communities as “best LBGTQ-friendly small towns.”

He found no gay bars or clubs onsite but nonetheless discovered New Hope and Lambertville to be “chill, culture-forward and vibrant towns for three gay men who wanted a weekend away.” And spiritedly decked out in Pride Month rainbow decorations.

The trio’s itinerary included a visit to the Michener Art Museum. And they caught the monthly LGBTQ high tea at the Bucks County Playhouse.

On the N.J. side, highlights were antiquing at A Touch of the Past and browsing furniture at Form + Matter Modern. The visitors also leafed through stacks of vintage magazines at Love Saves the Day.

The trio’s various dining choices had them straddling the river, with meals at the Salt House in the Keystone State and Under the Moon in the Garden State.

Over a morning coffee in New Hope’s Factory Girl Bake Shop, Piepenburg struck up a conversation with two elderly visitors.

“Coming down here is a breath of fresh air,” one of them told him. “Even if you live in Flemington, coming down to Lambertville and New Hope is like going away somewhere.”

Piepenburg’s final assessment was to praise the destination as a “gay jewel worth visiting.”

More on this gay getaway is at The New York Times.

Hotel Concierges Are Fonts of ‘Hidden Gem’ Knowledge; This One from New Hope Is No Exception